Back in the early '90s most game music was either tracker based or MIDI music. Some games even had music on CD, but that of course meant you had to insert the CD to listen to it. When I was a kid I had an Amiga computer and Amiga's four channel sound chip Paula soon became my best friend. I was about 11 years old when I had my first experience with a tracker program at my friend's house. It was a mind-blowing (and school ruining) experience for me to realise that I could do my own music without having to buy expensive instruments or other gear than maybe a cheap sampler.

For years I rushed together multiple songs per week. Most of them sounded quite raw and unfinished due to the fact that I was too keen to start another song before even finishing the previous one. After more than 25 years of composing tracker music I still love to do it every now and then. Getting involved with a project like Ion Maiden is - as you might imagine - a childhood dream come true!

What actually is tracker music? Tracker song has a certain number of different tracks on which you can write a list of notes. You can put one sample on each channel at once and you have some basic effects like volume, panning, vibrato etc per note. In the XM (Fast Tracker II) module format you can also draw volume and panning envelopes for the samples which is a very useful feature. The music in Ion Maiden is in XM format.

The whole tracker thing started on Amiga in the late 80s and that's why the 4-channel Protracker module was the most common format at first. There were a few multichannel trackers on Amiga too, but they didn't offer as good a sound quality because the hardware only supported four channels and anything else needed to be mixed down. 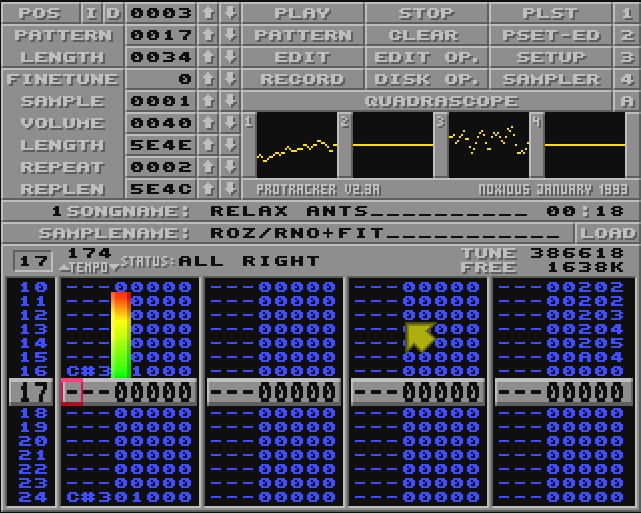 In the beginning of the 90s the PC soundcards got better and pretty soon Scream Tracker and Fast Tracker programs were released on PC. Then all of the sudden the bedroom composers all over the world had 32 channels to work with instead of just four. Sure, there were still some stubborn Amiga users - like me - who still preferred to stick to the old habits and keep on doing the four channel stuff until the 00s. And there was demand for that too since the Amiga demoscene was very alive even though the Commodore itself had pretty much died already.

The main composing tools I've been using for Ion Maiden soundtrack are Milky Tracker and a Fast Tracker II clone. Both of them are free if you're interested in trying them out. Before I found about the Fast Tracker II clone I used mainly Milky Tracker. I prefer the FT2 clone because of the original “oldskool” user interface. Although I've made most of my tracker songs in the past with Protracker on Amiga, Fast Tracker 2 is definitely the most familiar multichannel tracker for me. I never really got into Impulse Tracker. 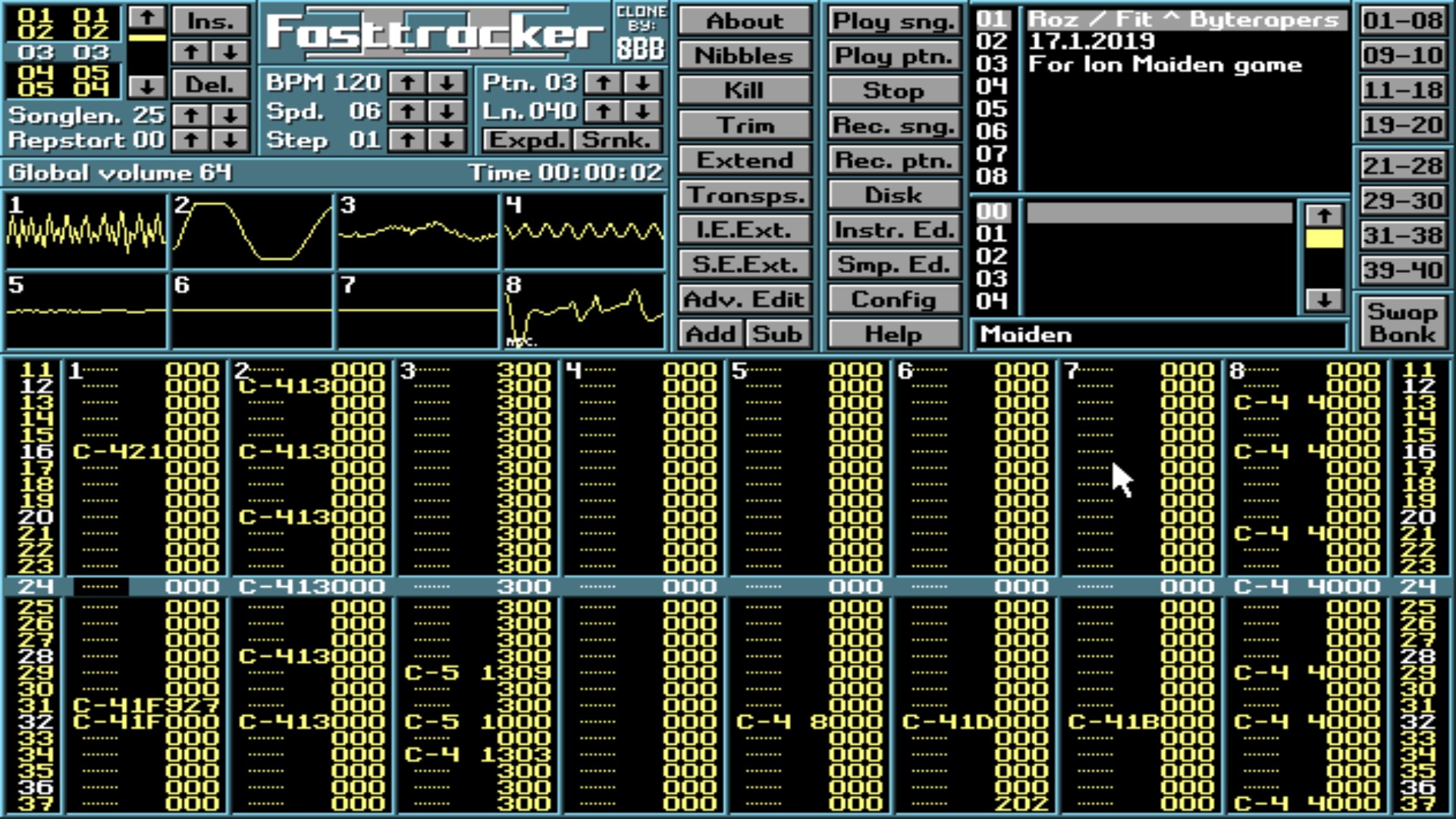 At the very beginning of the project I was actually thinking of making the soundtrack on the Amiga, for which I have rather deep feelings for, but then I kind of came to my senses. Ion Maiden is representing a time when tracker songs had 8-32 channels and at that time the Amiga was pretty much dead, so the four channel soundtrack might have been somewhat irrelevant in this case.

Furthermore, I've managed to gather quite a nice bunch of synth gear that I used to create the Ion Maiden soundtrack. Majority of the samples are sampled from my own hardware synthesizers. At the beginning of the project I started a song by recording stuff from the synthesizers to a DAW (Cubase Pro) and then downsampled them to be more compatible with the trackers. When I started using the Fast Tracker II clone I started using it's sampling feature as it was much faster and a lot more straightforward. If I needed a special sound I could just sample it right away.

One thing I kind of like about composing with the tracker software is the lack of polishing possibilities. It is very essential to choose suitable sounds right at the start. I didn't use much of my old sample libraries since I found it much faster to sample the needed sounds on the fly and on the other hand my equipment is now better quality than ever.

Not all tracks were born the same way. Some of the songs were ordered specially for certain purposes. A few times the devs told me about some key features they wanted and usually showed a few screenshots of the level, so I could get some ideas. They also sent me some reference tracks from other games that I could get ideas from but most of the time I pretty much found myself ignoring them. The guys seemed to be happy with the results anyway so I guess it was fine :) I also used some of the samples and themes with a slight variations on a few of the tracks to sort of glue the whole soundtrack together.

It's a joyful thing to have an artistic freedom to do whatever I do as long as it suits the game and preferably kicks ass. I was a teenager in the 90s so I had a pretty good idea of how the game is going to be. I made some energetic electronic tracks that in my mind would suit an action game from that era. 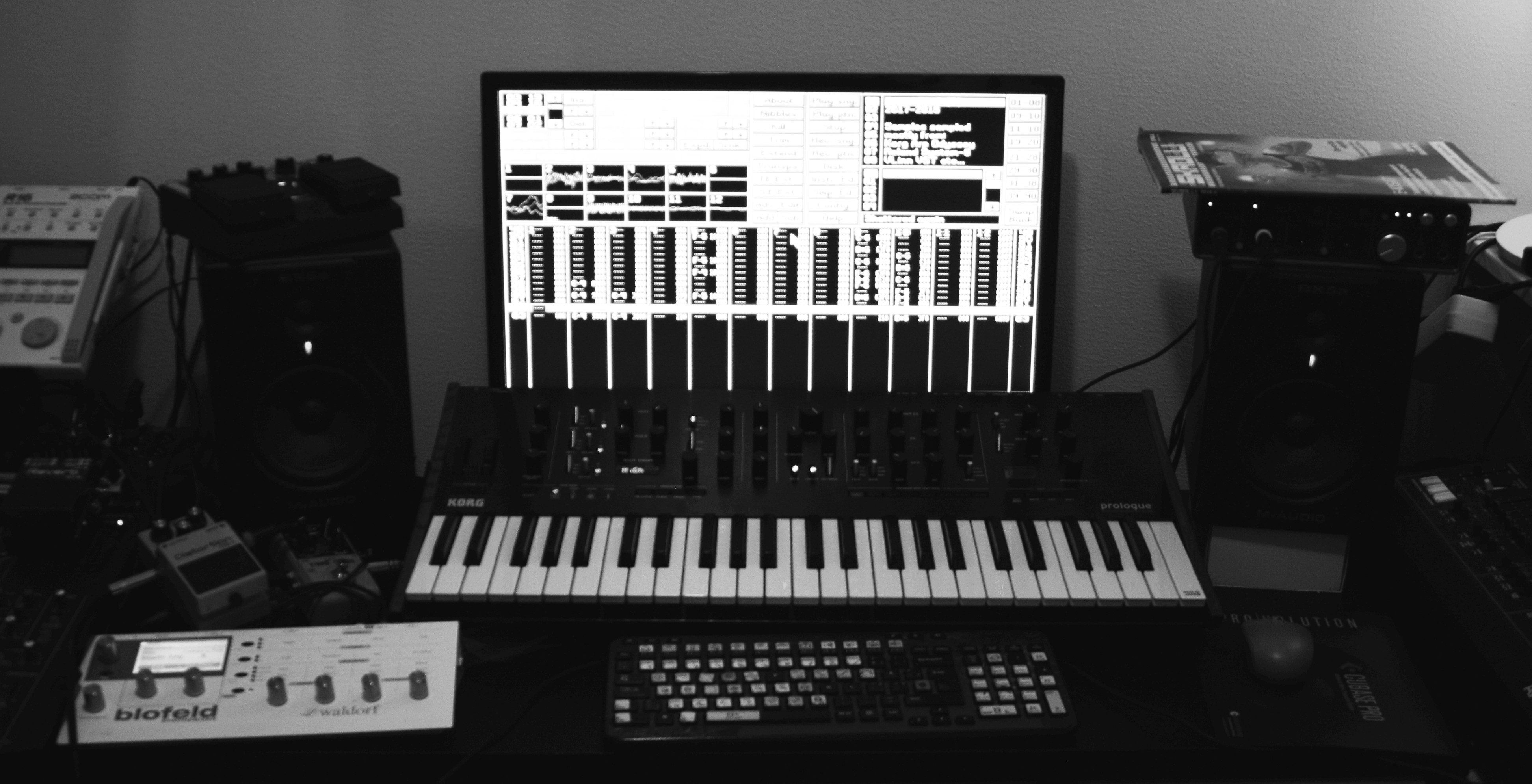 One of the challenges of making music for a game is that you have to get the balance right with the melodic elements. The tracks are about 6-8 minutes long and they may loop a few times depending on the game players' playing style. The player shouldn't get bored with the songs so they have to be entertaining, preferably boosting the mood, but the melodic parts cannot be too irritating. One of my goals was to make memorable music without being too generic. As the Ion Maiden game is kind of a special product I wanted the music to be that as well.

There are still few important tracks to be done for the game. As a working family man it has been sometimes hard to find time and energy to compose tracks, but on the other hand I have had a massively good time while doing the music. I hope you'll enjoy the game and the soundtrack!

Some of the synthesizers used in this project: Roland System-8, XP-30, TB-03, JP-08, Korg Prologue, Minilogue, Novation Bass Station 2, Peak, Moog Subsequent 37, Waldorf Blofeld, a modular synthesizer plus some others. 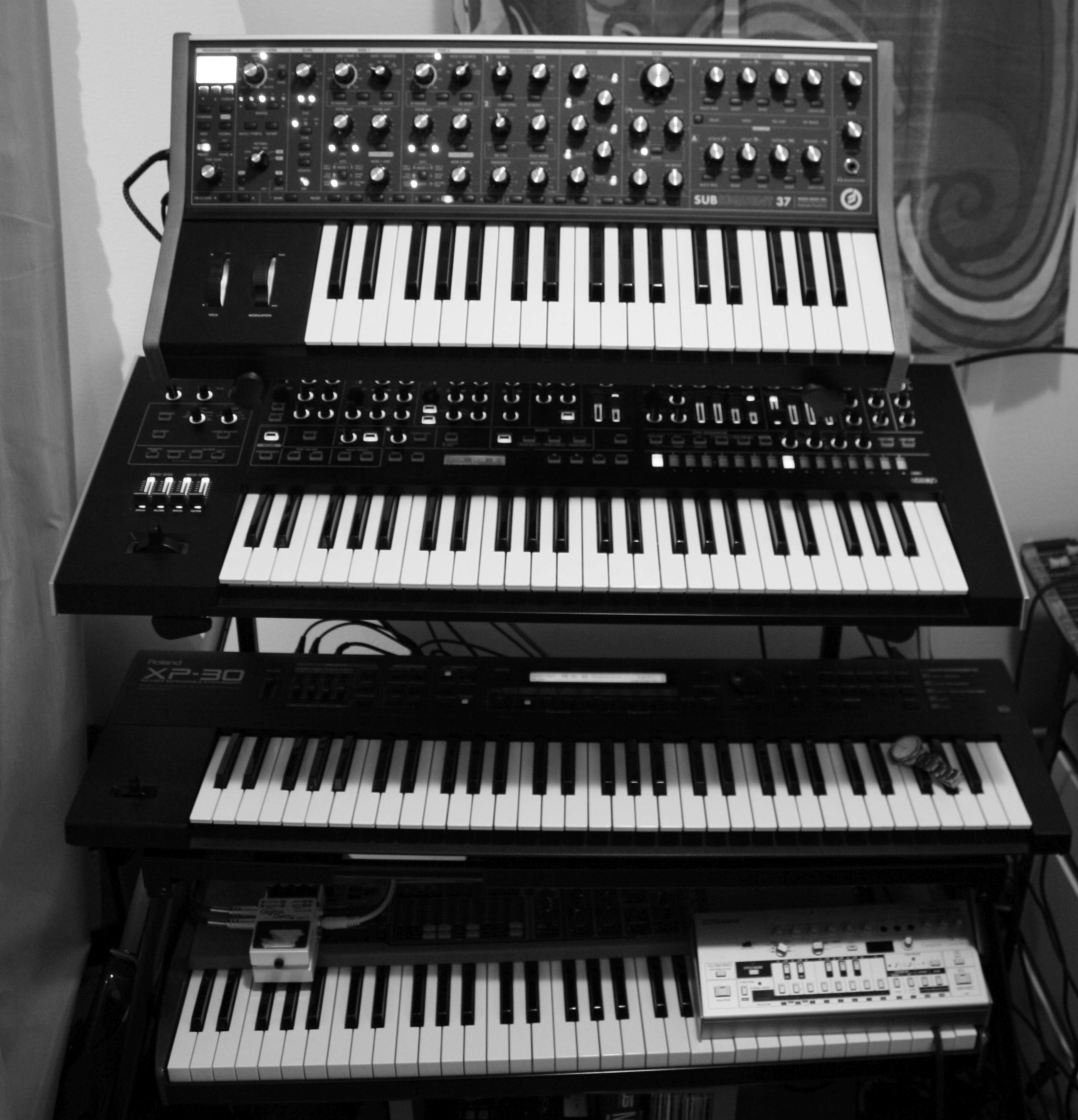 Useless trivia: There are few songs on the Ion Maiden soundtrack that were finished while flying in the altitude of over 10 km on the airplane. Making music is a really great way to make time fly while sitting on a plane! 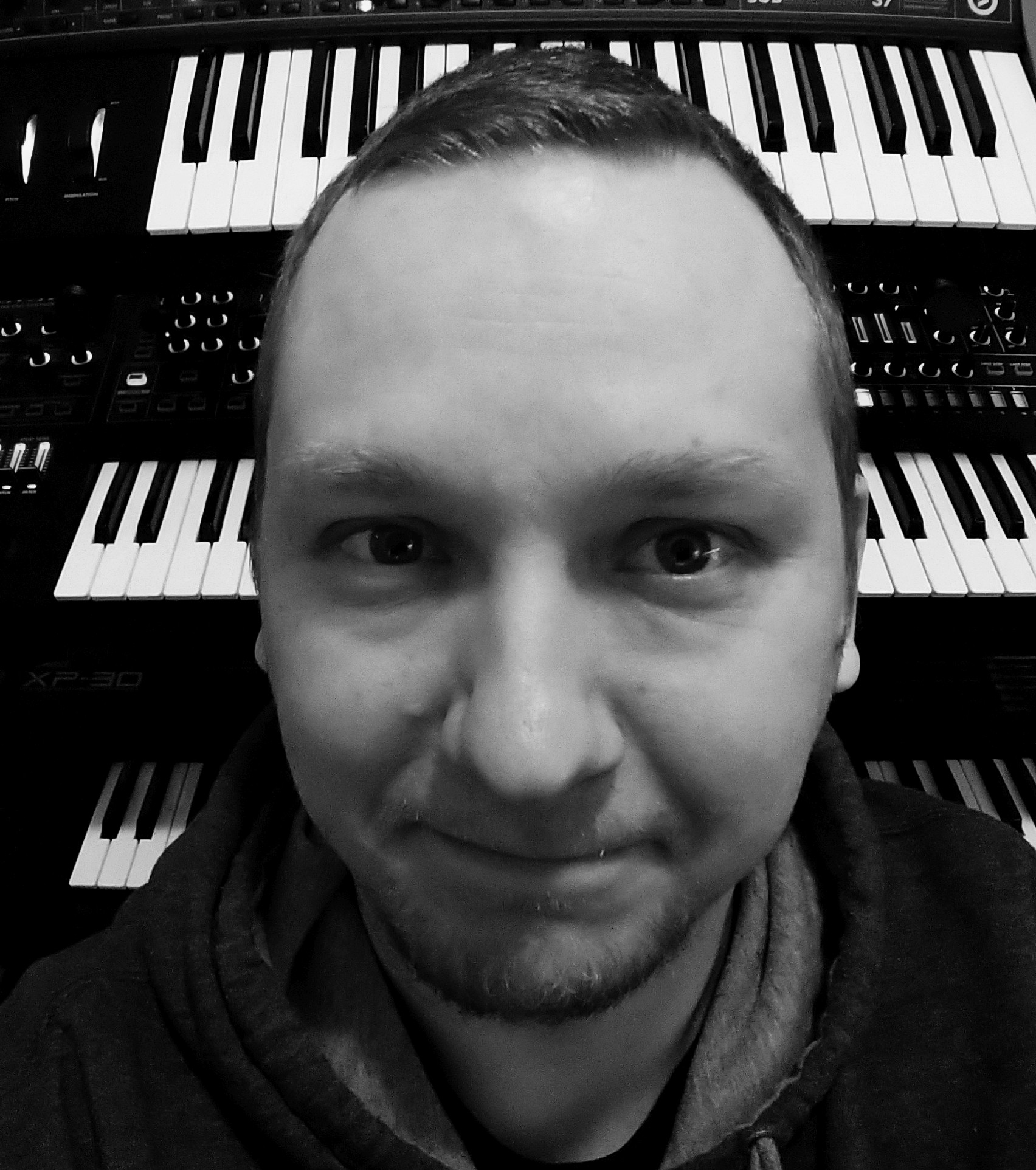