For this first dev blog about GRAVEN, lead designer David "scar3crow" Queener delves into the lore aspects of the game and his thoughts on how the world is structured.

GRAVEN breathes as much in its lore as it does in the creatures, buildings, or people. It is not written as padding or filler, but an additional thread traversing the world. Lore is everywhere, though not always obvious, and the presuppositions of it inform the structure of the game world.

Inspiration can strike from many vantage points, though I would credit my avenues for the lore to evocative lyrics, such as the early works of Opeth and Tristania, but particularly the writing of M.R. James whose subdued and curiously grounded ghost stories made the mundane fantastical in already fantastic circumstances. Paired with such influences, and an inclination as an armchair theologian, GRAVEN’s protagonist being a priest drew these components together, and they guide me from the esoteric to the expository. 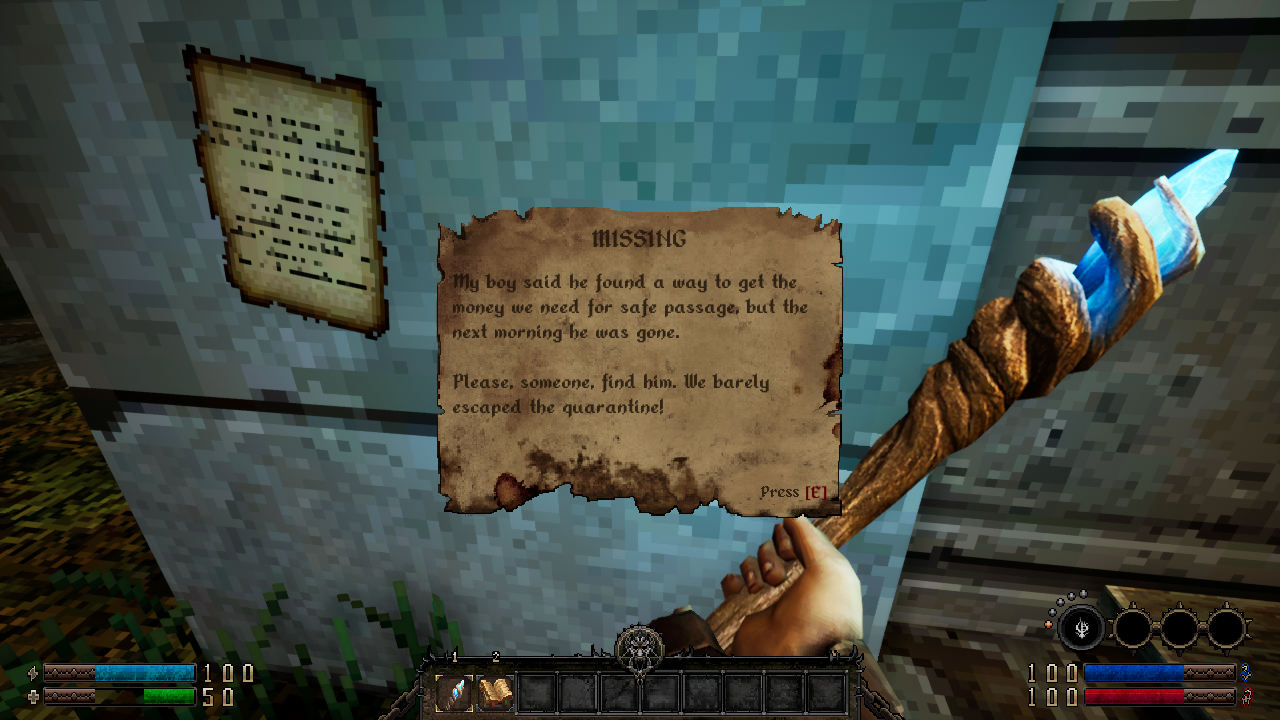 GRAVEN takes place in a different universe, a purely physical one. Under the benevolent but distant eye of a creator, there is no ethereal element, simply the world as experienced. Though how it works is far from mundane or without mystery. Magic is real, and controversial. Its convenience entices, but the risk is pulling upon the garment of reality. Civilized society has thus long eschewed it, in favor of a strong manual work ethic, and ingenuity. The peaceful world is their church, difficult though it may be, as beyond those borders reside those who indulge in magic, and thus lose themselves, and the world around them.

The Priest is a walking contradiction, a man sentenced to death in the desert, who lives and breathes the fetid swamp air. A devout follower who abstained from magic for its corrupting nature now effortlessly channels it, compelled by greater forces. This is part of why the player is the exception in this world, the priest is the squared circle to the dilemma and existential threat facing all of them. 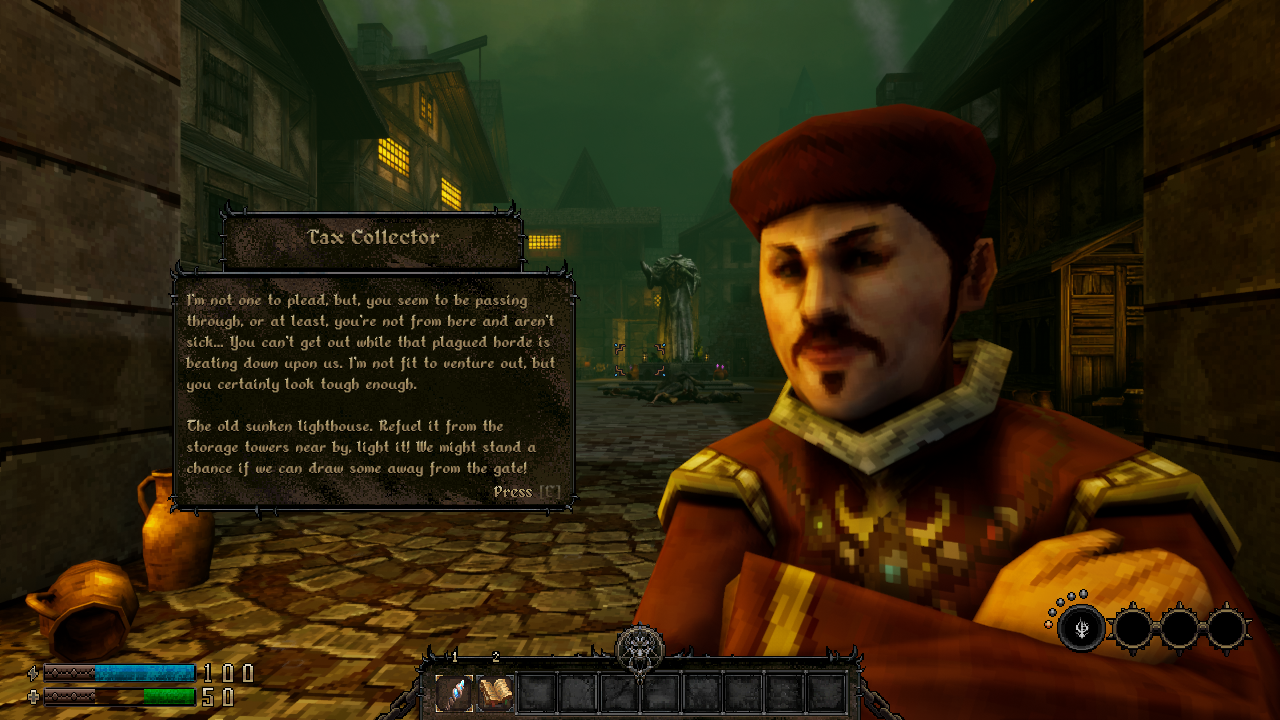 An early example of this can be found in lore scraps and conversations in the first quest, depending on how you handle it. When you approach the gates of Cruxfirth, there are two postings on the wall, one of which is from a woman, desperately searching for her son who has gone missing. Immediately beyond this is the Tax Collector, who asks that you illuminate the lighthouse. On the approach to the lighthouse, you can find a diary, written by a boy who speaks of a golden opportunity to get out of town, after completing this one job. Cut and dry stuff for sure, but if you were to return to town and speak to the Tax Collector again, he greets you impatiently, and compares your performance to “that boy.” Thus we learn a little bit about his character, his approach regarding others, and the fact that he would send a boy just as well as a grown man on such a dangerous mission speaks to either his self-importance, cowardice, or both.

Lore is not simply explanation or clarification, nor is it purely external. The Priest makes notes as you play the game, picking up on details that you might have missed. The scribbling of quill pen upon parchment should tip you off to consulting the journal. Perhaps the mosaic has an asymmetry, or that creature lurched strangely when struck in a particular way. There are other writings as well to peruse, it is a literate society after all. Lost diaries detailing private plans, ledgers indicating business endeavors, and scholastic research about strange creatures. You can find entirely new opportunities, resources, and quests through the lore. Not everything is delivered to you through a citizen approaching. 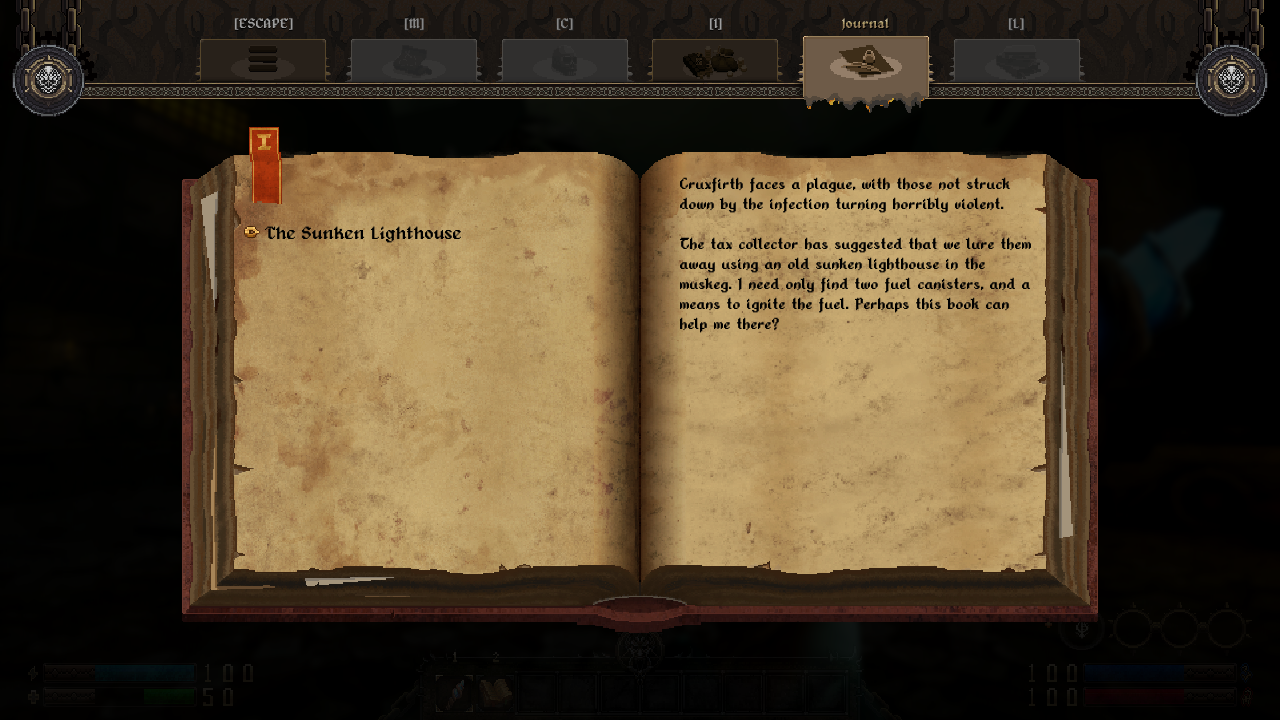 As knowledge is pursued, it is gained, and this gain brings power. But if you learn of cryptic passages to forgotten hovels, buried beneath moss and grave soil, will you avoid it? Or will this knowledge tempt you, tempt you to explore, and uncover things not meant for a human to experience. What lurks in the sunless fog beneath catacombs? What lives in manors that bear no vermin, as rats know to avoid them? What horrors await you? What knowledge? What power?

Wishlist GRAVEN on Steam and GOG to find out...