In this blog, VFX artist Philippe Mesotten takes us through the process behind the distinct GRAVEN look.

Hi there! I’m Philippe Mesotten, GRAVEN’s master of gore, explosions and everything that sparks, a.k.a. VFX artist.

Real time visual effects are not only the cherry on top of everything else, but are also used to better convey gameplay elements towards the player. By combining elements from texturing, modeling, tech-art and animation, you can conjure up all sorts of interesting illusions to breathe life into the game world.

I’ve worked on all kinds of games, ranging from tiny indie to AAA, for all kinds of platforms including VR. But GRAVEN’s artstyle is one I had never tackled before. However, I have fallen in love with it ever since Frederik Schreiber asked me to help Slipgate Ironworks on a new thingy they were brewing.

Working on mostly child-friendly games in the past, the amount of blood & gore, dismemberments, poo-flinging devices and grizzly environments really got me positively triggered!

One of the most obvious things that sets GRAVEN apart from 2021-era games is the old-school pixelated low-res setting.

To get this feel in the particle systems as well, the first and biggest step to take is to have all textures and flipbooks rendered out really small (32x32-128x128 for single sprites and 256x256-1024x1024 for flipbooks) and imported with filtering set to “nearest neighbour”. Setting the filtering to nearest neighbour ensures that the blurry low resolution textures are now rendered out with sharp pixel edges, where each pixel has its own value rather than creating a gradient across multiple pixels.

Another step that adds to that granularity is having several types of particles, like dust, rendered as dithered (masked), instead of translucent or additive.

In the image below you can see the difference between tri-linear and nearest neighbour filtering. The texture itself is of 64x64 resolution and is actually one of the many splatter textures used in GRAVEN. 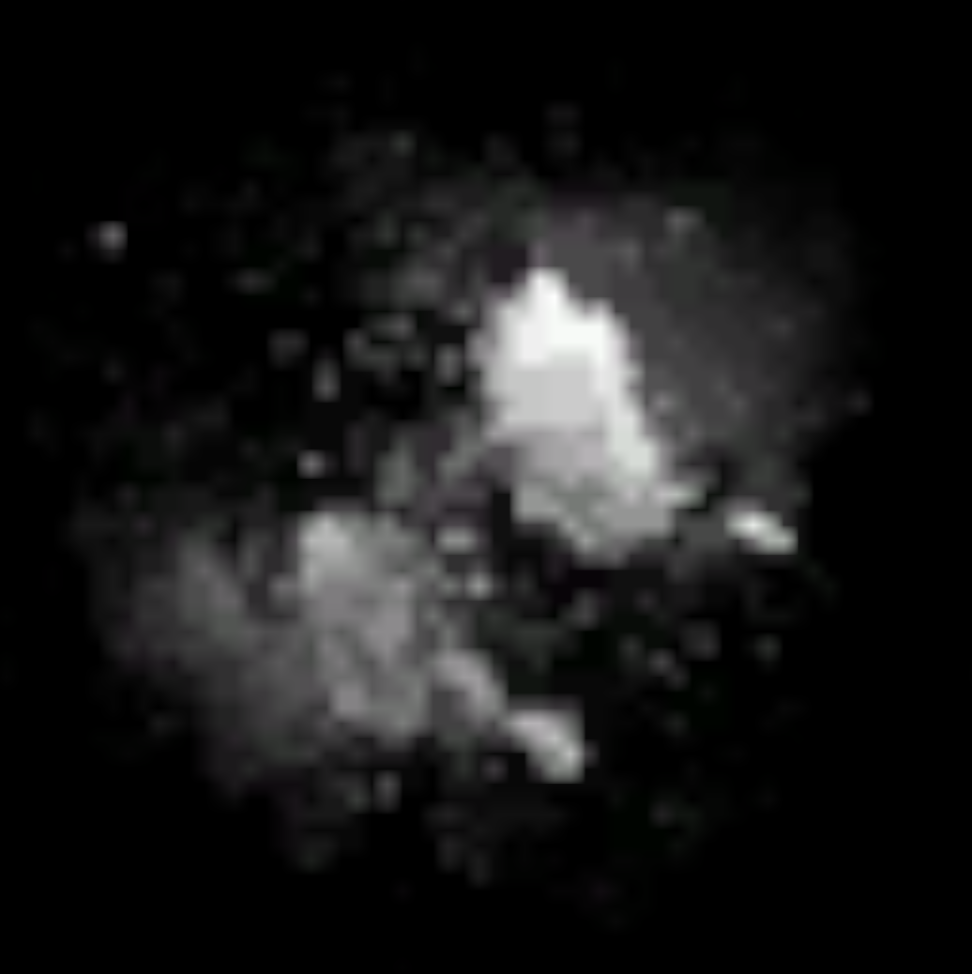 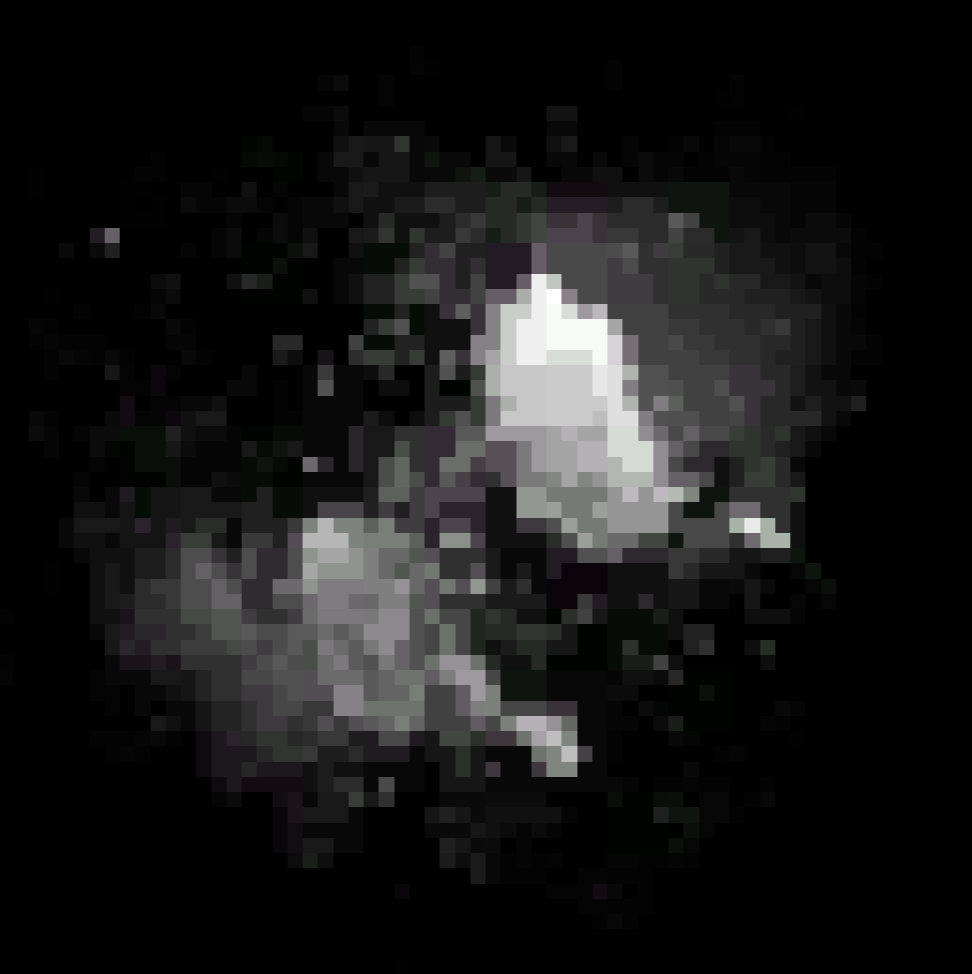 While at first glance GRAVEN may look oldschool and straight out of the 20th century, the engine it is built in, Unreal Engine 4, comes with a whole battery of cool technology & wizardry! One of those tools that is used for VFX inside of UE4, is Niagara.

At the very beginning of the GRAVEN project, Niagara itself was still in its infancy and marked “experimental” and thus not ready for production purposes as it was very prone to crash your project or game. So I started out doing several VFX in the old Cascade system, such as the old over the top flamethrower effect for the “Inflame” spell (That is now toned down by a lot, as the Inflame spell should just heat things, not set entire rainforests ablaze) and the Discharge spell. The new Inflame spell is now also done in Niagara.

Now fully transitioned to Niagara, there is a lot more control over what you can do with particles without having to nag the programmers all the time because “Cascade can’t do this...”.

It also gives me the ability to easily expose all sorts of variables that other artists or programmers might want to change down the line.

Some simple and most used examples of such variables are particle color, lifetime, spawn count and scale.

In the images below you can see the variables in Niagara itself on the left, and on the right how an artist or programmer might see these exposed variables when he or she places/edits the Niagara System in the world or a blueprint. (Pretty straightforward!) 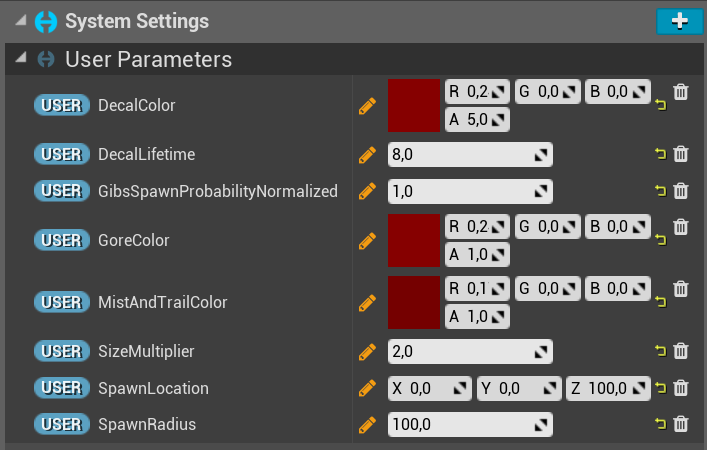 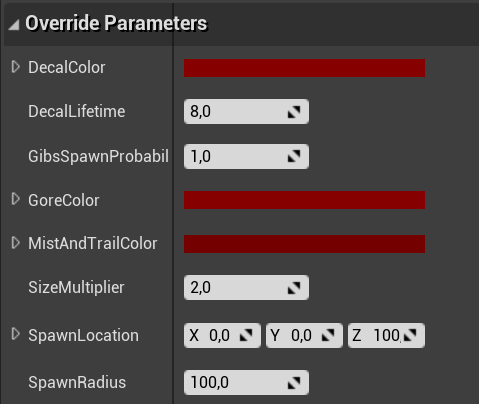 Among my favorite effects I’ve done for GRAVEN up until now are the bloody & gory explosion of enemies and corpse piles. Doing mostly child friendly VFX up until now, this was a nice change of scenery ;-)

One of many blood effects

VFX are also a way to influence gameplay and readability. As a player it is good to know what things you can interact with, what’s potentially good or bad for you and how for instance spells affect the environment.

A clear example is the simple appearing of a crow, whenever you hit a checkpoint, so you know you can die in peace and respawn right there.

As a last note, performance: Besides giving the VFX a more old school look, the dithering of textures/materials also boosts performance quite a lot, as it is pretty much a cheap masked material that tries desperately to be a translucent one. (But never will be :( )

Having small texture resolutions also helps performance for obvious reasons, and overdraw in GRAVEN is minimized through (besides dithering) particle texture cutouts.

Other logical places to keep VFX performance in check are the use of GPU particles, not overdoing it with lights in particle systems, introducing LODs for larger effects, using lots of material instances instead of master materials and keeping material instructions low.

In the images below you can clearly see the positive effect dithering has on overdraw and material instructions. Where bright green is good and bright red is bad. 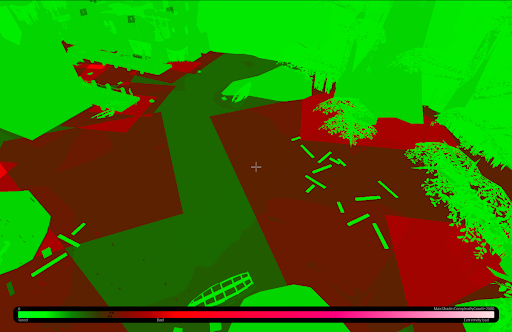 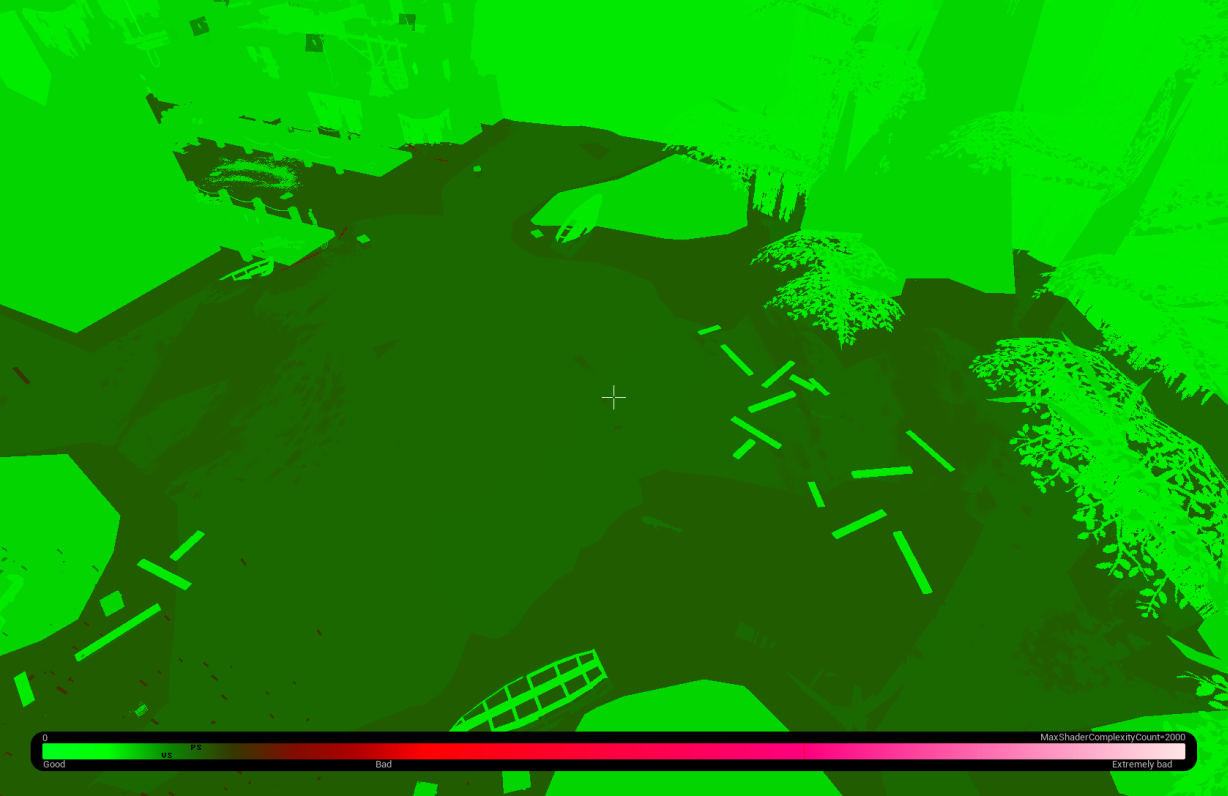 If your weary eyes made it until here, congratulations! And thank you for reading ;-).

I’m hoping this blog has made you inch a little bit closer to wishlisting or buying the game, or even piqued your interest for real time VFX.

Other things I’ve worked on, including other Slipgate Ironworks/3DRealms titles, you are welcome to check out here: https://www.artstation.com/philippenac & here https://twitter.com/MrPhilippe_ .

I would also like to thank the entire team for being awesome, and I know that together we can and will deliver a kick-ass GRAVEN! And last but not least, we'd also like to thank our community for all the great feedback they have shared with us since the early access launch of GRAVEN. We promise that we read everything and we are working hard to make GRAVEN the best game it can be!

GRAVEN is out in Early Access on Steam and GOG!