In this dev blog, level designer and director Romain Barrilliot describes the making of The Priory in WRATH: Aeon of Ruin

Anyone who has played the Early Access version of WRATH: Aeon of Ruin to completion has played The Priory, whose portal lies at the top of the snowy plateau in Mourningvale. This desolate and sprawling level is what we call the “big boy” of the chapter; it is larger and more difficult on average than the other four levels in the hub. Every chapter in WRATH has one such “big boy”, and today I will tell you the story of The Priory.

The Priory is one of the few levels that was started very early on. Its distinctive set piece, the chapel, was already a thing back when the game had not been picked up by 3D Realms and 1C Entertainment yet. When I joined the project Jeremiah Fox, the game director, had wanted to expand on it greatly and to make it a proper religious complex. The description for the level in our internal documents read as follow:

“A dilapidated complex used by an extinct religious sect.  The complex is comprised of ransacked living quarters, a library, gardens and a chapel surrounding a central courtyard.  The chapel is the primary focus. Inside the chapel, the player finds passage to a secret, underground network beneath it.  Within it are deep chasms, flowing rivers of lava, chambers carved into the stone and profane altars of blood sacrifice and other malfeasance.” 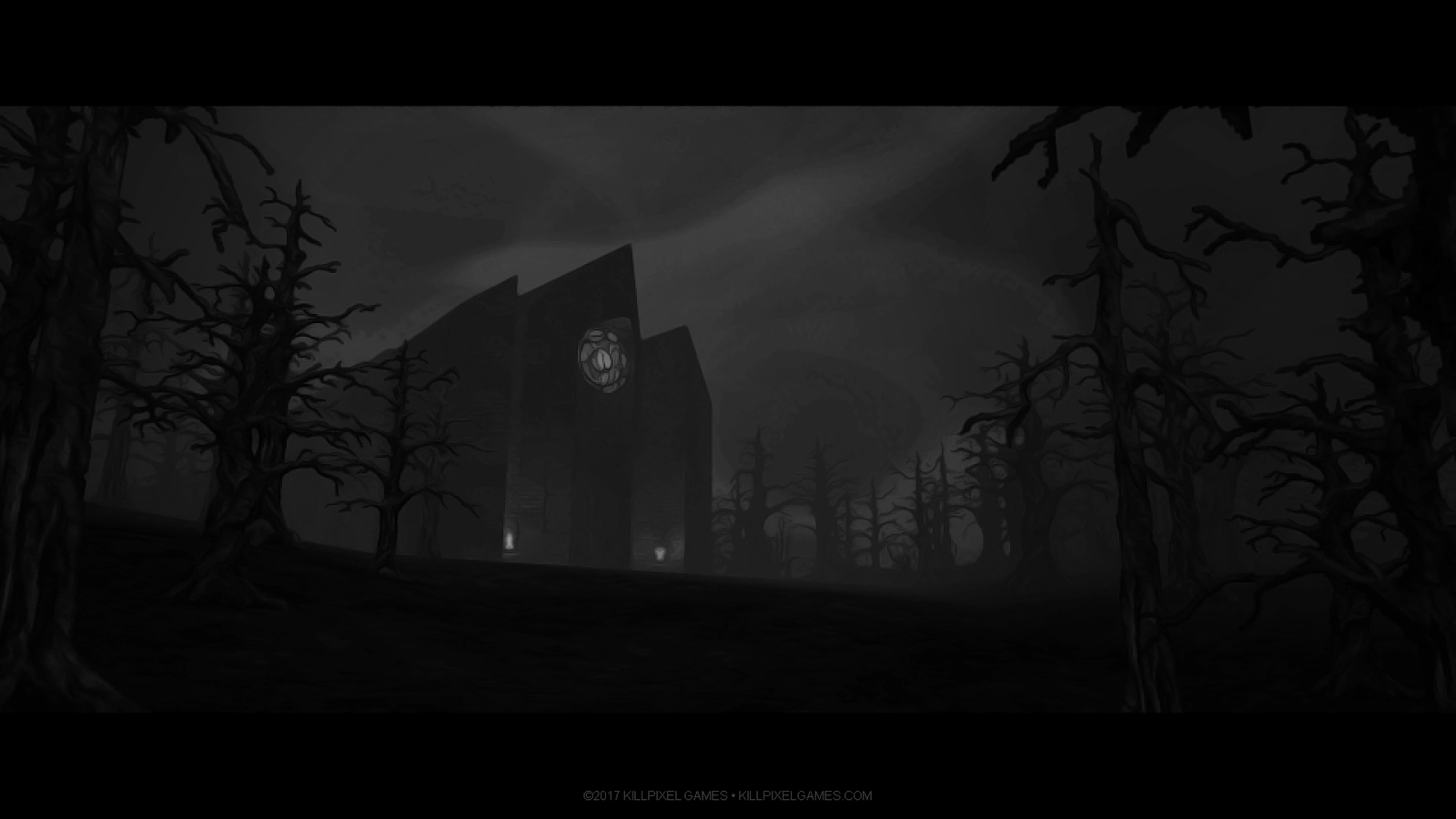 The Priory’s chapel is one of the oldest concepts from WRATH. It is almost identical in the final game.

Initially, Daniel Mortensen, who 3D Realms Discord regulars know as Baracuda, was assigned to the level while I was busy working on The Mire and The Flooded Dunes. After a little while, Daniel had to move on to other projects so the level sat dormant. Jeremiah decided that the direction wasn’t exactly what he had wanted so he assigned me to work on The Priory.

The year is 2019 and we are in February. I am invited by Frederik Schreiber, VP of 3D Realms, to come to our offices in Denmark along with Jeremiah. Naturally, coming from southern France with its warm winters, I catch a nasty cold almost immediately upon landing. This period is when I lay the first brush in an empty map file that would eventually become The Priory.

I knew early on I wanted the level to take cues from Elliott Cannon’s masterpiece Bluff Eversmoking, which is a massive level in Epic Games’ Unreal that also takes place in a large religious complex. It is a level that clearly deserves the term epic, as it is impressive even to this day in terms of scope, style and layout. Following the document for the level, I quickly came up with an outer wall and an inside perimeter for the complex, along with a cloister.

The main issue was apparent very quickly: it was simply too boxy and would not look good even after it was art-passed. Jeremiah, probably half-jokingly, suggested the cloister be circular instead of a square, which would make it so that the adjacent buildings would follow this outline. Anyone who knows Quake level design knows that making angled architecture isn’t an easy feat. It is already delicate at 45 degrees, but since we use 12-sided cylinders, I had to use 22.5 degree angles. This was the first of many, many sessions of head scratching on my part. 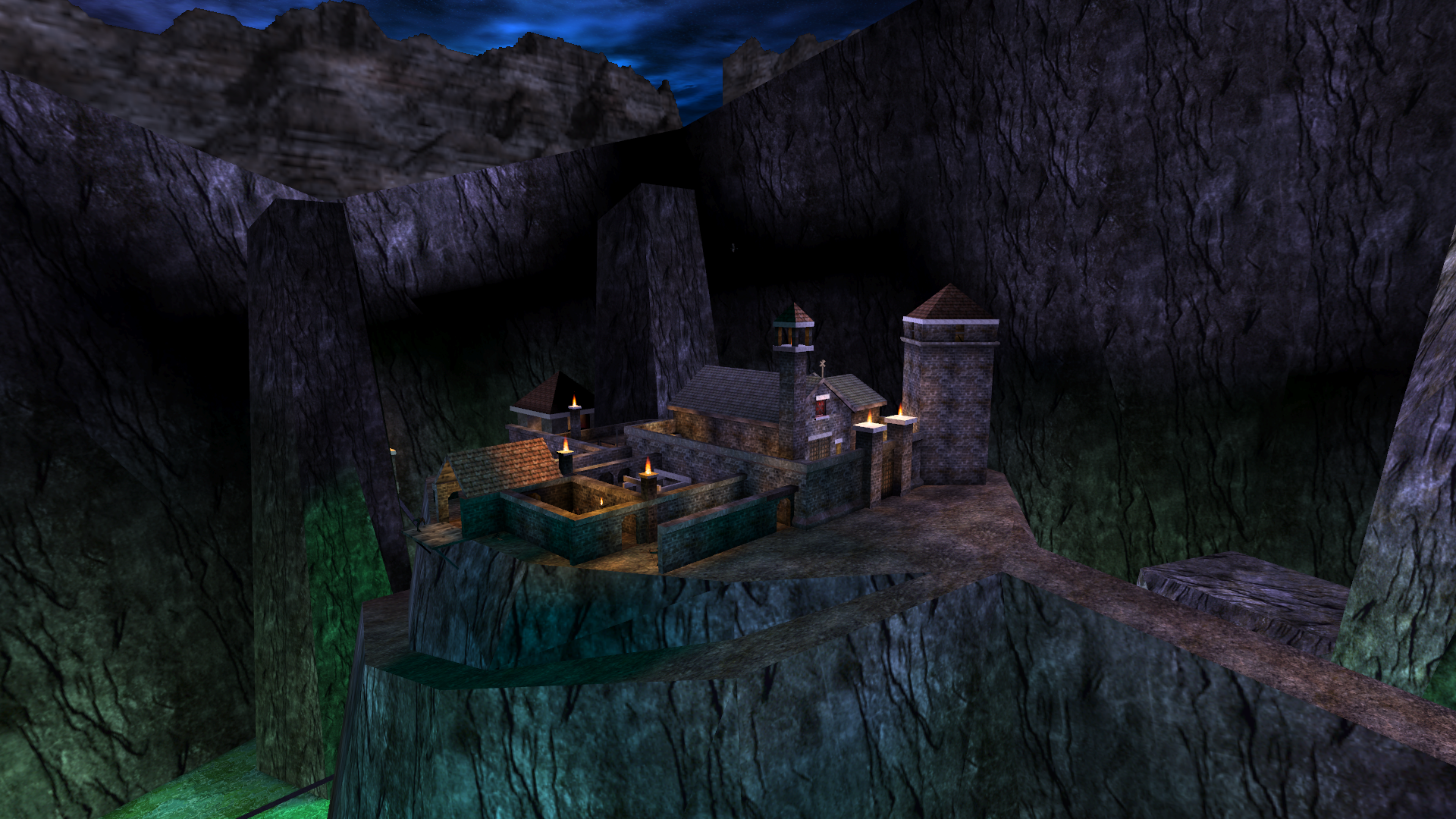 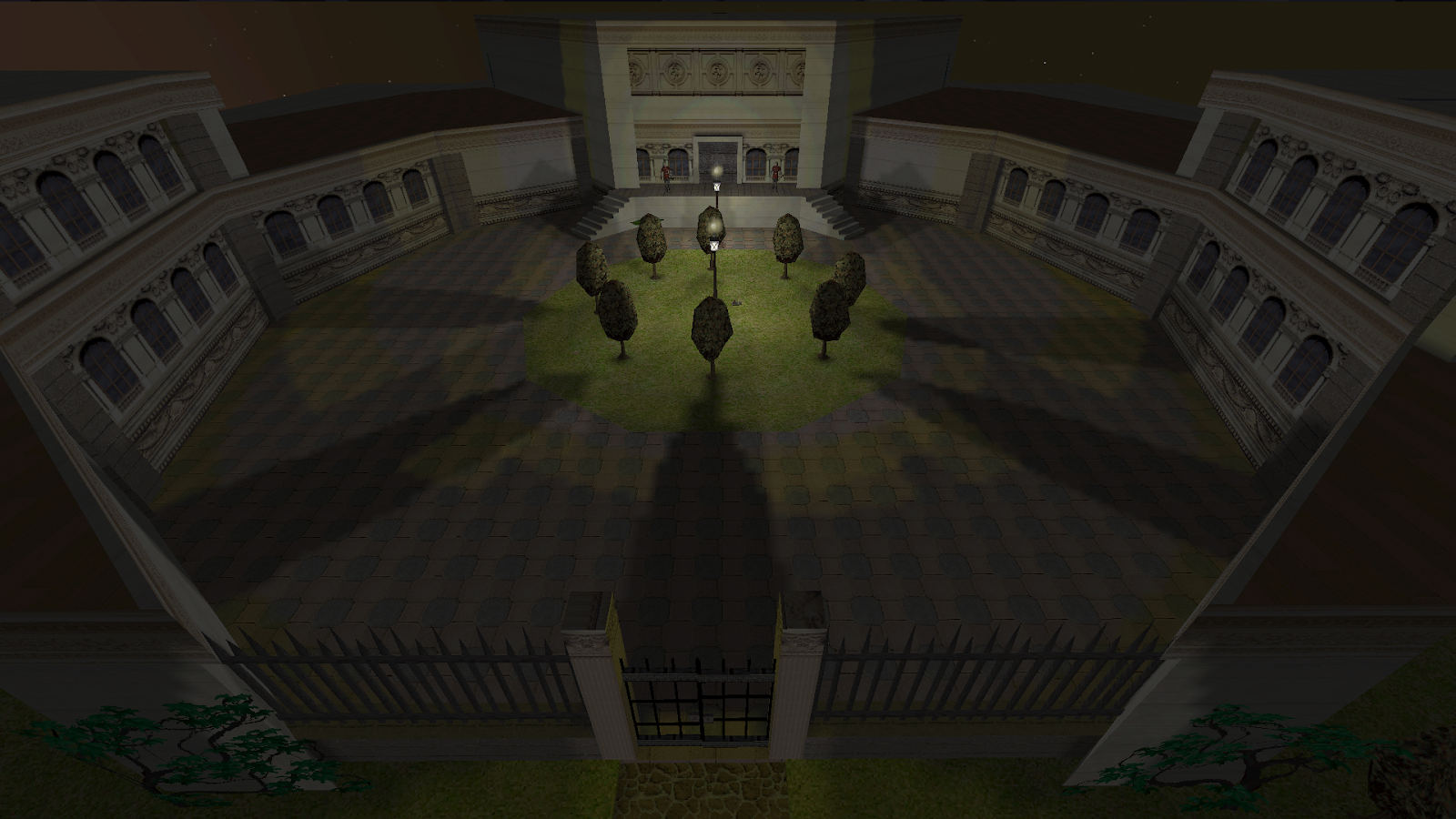 To make this idea of a circular complex a reality, I looked at one of my favorite levels from Thief 2: The Metal Age. Running Interference by Rich Carlson, Tim Stellmach, Rick Ernst and Terri Brosius is the first mission in the game and, through inscrutable black magic when you know how incredibly primitive the CSG operations are in that game’s editor, was built exactly the way I was hoping to achieve with The Priory. Not only does Running Interference’s exterior use a circular structure but the interior has many rooms with unorthodox shapes and angles that were perfect for what I had in mind with The Priory.

I scrapped the whole map file and made the circular cloister you can still see in the final level along with a few adjacent buildings that followed the outline. Jeremiah and the guys in the office liked what they saw and gave me the green light, so I decided to pursue this direction and quickly blocked most of the complex out.

The level had to be massive and had to feel like a journey. One of the trickiest aspects of it was to make it so that players don’t get lost and don’t get bored, so to contrast with the rather cramped and dark interiors, I decided I wanted the outdoor sections to be grand in scale and much brighter while still retaining a desolate feel. In addition to the inspiration for the rounded cloister, Thief was also a good source of inspiration for the paths the players can take in and around the complex. I had to simplify it all since WRATH and Thief are two completely different beasts and expect different things from the players, but taking cues from it in terms of progression definitely made the trip through the complex a lot more interesting.

Early blockout of the circular cloister

The interiors were easy enough to make if one doesn’t count the hairs I pulled from my head, but the exterior was a lot tougher. Considering the complex was very large, I had to make it so that the exterior had a lot of elevation differences and a lot of cover since it surrounded the entirety of the building. One of the things I really wanted was for the player to see the chapel from very away but not to be able to enter the complex through the front gate, so I came up with the idea of having to infiltrate the complex through caves that eventually led to the gate, this time from the inside of the perimeter, again taking cues from my favorite game of all time: Thief. Having the player break into the western building through a secret passage (in this case, a bookshelf hiding a path to a cellar) was another obvious trope from Thief.

If you take a look at The Mire and The Priory, you will see that they both follow a very similar structure: the red door is seen from a distance and is the ultimate goal while the corresponding red key is found underground in places where you can see it but cannot get to it immediately. One of the things I wanted with this level was for the rooftops to be accessible so that players can have fun exploring the level’s heights and discover a lot of secrets.

The final, hellish lava cave is another location that was written down in the document and this one had to be quite different considering the player acquires the ability to fly for a short time. One of the biggest challenges, along with making the space more interesting than just traveling from point A to point B, was to make combat fun there, which wasn’t an easy task. Jeremiah really wanted this area to use Heretics and Oppressors so I had to make it work to the best of my ability considering the cave had to be gigantic with very long sightlines so the players can use the Slag Cannon in a relatively safe environment. I think I managed to pull this off quite well since the cave is quite popular and memorable, and definitely makes an impression when you first stumble upon it.

Late blockout of The Priory

Once the level was finally approved, we started art-passing it. We knew firsthand that all of my natural terrain blockout would necessitate a LOT of work to make it look like a proper mountain area. We unfortunately had to cut a cliffside vista that ran to the west of the complex both for performance reasons and because of the amount of work required to make it look nice. At the time we were on a tight schedule to polish the level for its Early Access update. Instead, we made the complex nest inside a sort of plateau between two cliffs with a few frozen rivers.

The path from the start portal to the main gate was the last bit of layout I built for the level. Adding decoration to the exterior was very simple but decorating the interiors was much harder, mostly because most of them are using 22.5 degree angles and that level designers have to do a lot of tedious and very time-consuming work for the levels to look nice, such as hiding all non-visible faces by slicing geometry so that not only are they not rendered, but lightmaps also don’t bleed which is very apparent with ambient occlusion. In levels that have tens of thousands of brushes and with non-90 degree geometry, this can very quickly result in a huge amount of hours spent doing just that. 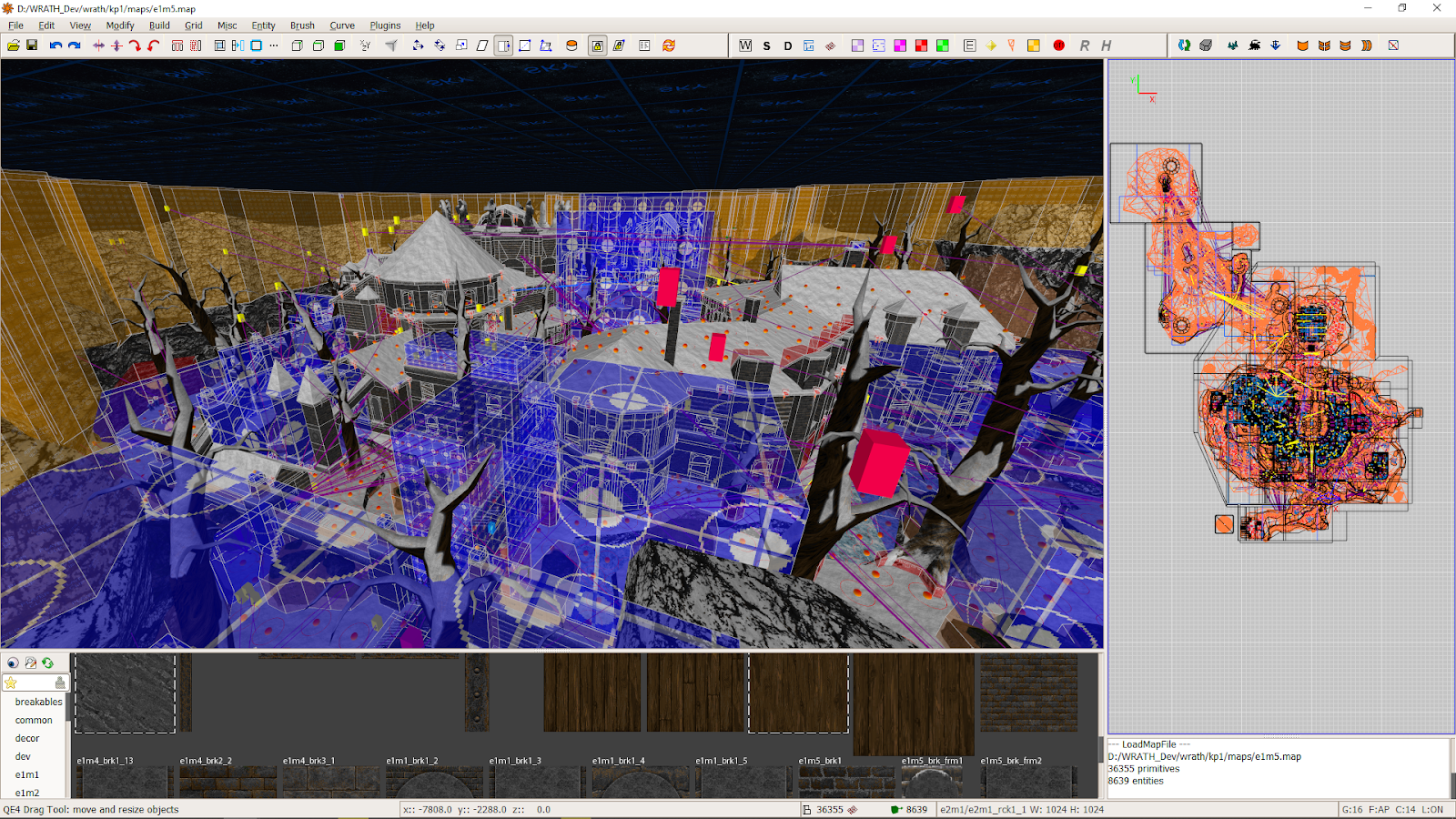 Current version of The Priory in editor

After an untold amount of hours spent working on this level tirelessly, we finally released it as the second-to-last Early Access content update. I knew the level had a lot of issues; it was too dark, the interiors were nowhere near finished in terms of decoration, it was lacking some scripting that resulted in sequence breaks not spawning things and so on.

People really liked the level overall so I kept working on it for the following update that contained The Hollow, with many, many bug fixes and additions. The Priory in the final Early Access version isn’t the finished version, which features even more elements to make the level feel more like a believable complex as well as some small changes to the layout so that players don’t get lost as easily (the path to the tower is an especially egregious spot in that regard).

I am very proud of The Priory overall. It was a huge challenge to make and I believe all of the sweat and lost hairs were worth it. I am very happy that a few people regard it as the best level in the game so far because I always go into making these levels with the intention of making them the best levels possible. Making a level such as The Priory takes a huge amount of time and effort. Thankfully not all of our levels are this large and complex but it is a good indication of just how tricky they are to make and I hope this blog post shed some light as to why.