3D Realms has been around for some time now, originally being formed in 1987 (as Apogee Software). However, today marks something special. 20 years ago today, the 3D Realms Website first went online. Check out a few details about this event.

Today is a monumental day in 3D Realms history.  Our website turns 20 years old today!   Originally started in the days before we called ourselves 3D Realms, this website first launched on July 7, 1995.  Back then, it was a bit "wild west" in terms of the way the web worked.  Most webpages back then were just a grey page with a picture.  Or two if you were lucky.

Back in the early 90's, Scott Miller & George Broussard had hired a dedicated Online Support Manager (Joe Siegler) to represent the company online in such places like CompuServe, Prodigy, Delphi, America Online (then still called PC Link).  This was working well, but the World Wide Web was invented in 1994, just a couple of years after we started this sort of online support.  So it made sense to transition there for information and support.

When we first started, we weren't using the 3drealms.com domain name we are now, as the first 3D Realms title (Terminal Velocity) wasn't released until the following year.  We wanted to use apogee.com, but that was taken by another company.  Turns out there were quite a few companies named Apogee at that time who were already online.  Many a moon ago, we had a page dedicated to those "other" Apogee companies.  You can still see this page today.  Anyway, because someone owned the domain name apogee.com, we needed another name. We ended up using http://www.apogee1.com. It was felt at that time to be a tie-in to the way we distributed shareware episodes of our games at the time.  You see, most of our distribution was done on old Dial-up BBS's - like Software Creations.  Most listings of files would be shown in alphabetical order, and to help with that, we used to name our files things like #1wolf3d.zip or #1cosmo.zip, things like that.  So naming our website apogee1.com spoke to the "#1" naming convention we had for our shareware files at the time.

Our site has had many looks over the 20 years it has been up, especially in the first 6 or 7 years or so.  We're going to take a trip down memory lane and look at some screenshots from earlier versions of the website.

The earliest version of our website we have no picture of, nor any clear memory of what it actually looked like.  Websites back in 1995 weren't much more than basic pages with a picture if you were lucky, so it is probably not hard to imagine what it looked like.  But, we have no archive of that version.  If someone reading this article actually has a screen grab of the original version of the website, we'd love to hear from you.

After a short time with the original presence, we decided to move to something more structured.  That was in partnership with our main distributor at the time, the Software Creations BBS.  In 2015, there are a lot of people that don't even know what a BBS is, so here's some info on them if you want to read, and we've included a picture of what Software Creations looked like.  It was run by Dan Linton in his house, so imagine having all of these PC's in your basement, not to mention all the phone lines required to service all of this!  (This wasn't even all of the systems, only a fraction) :) 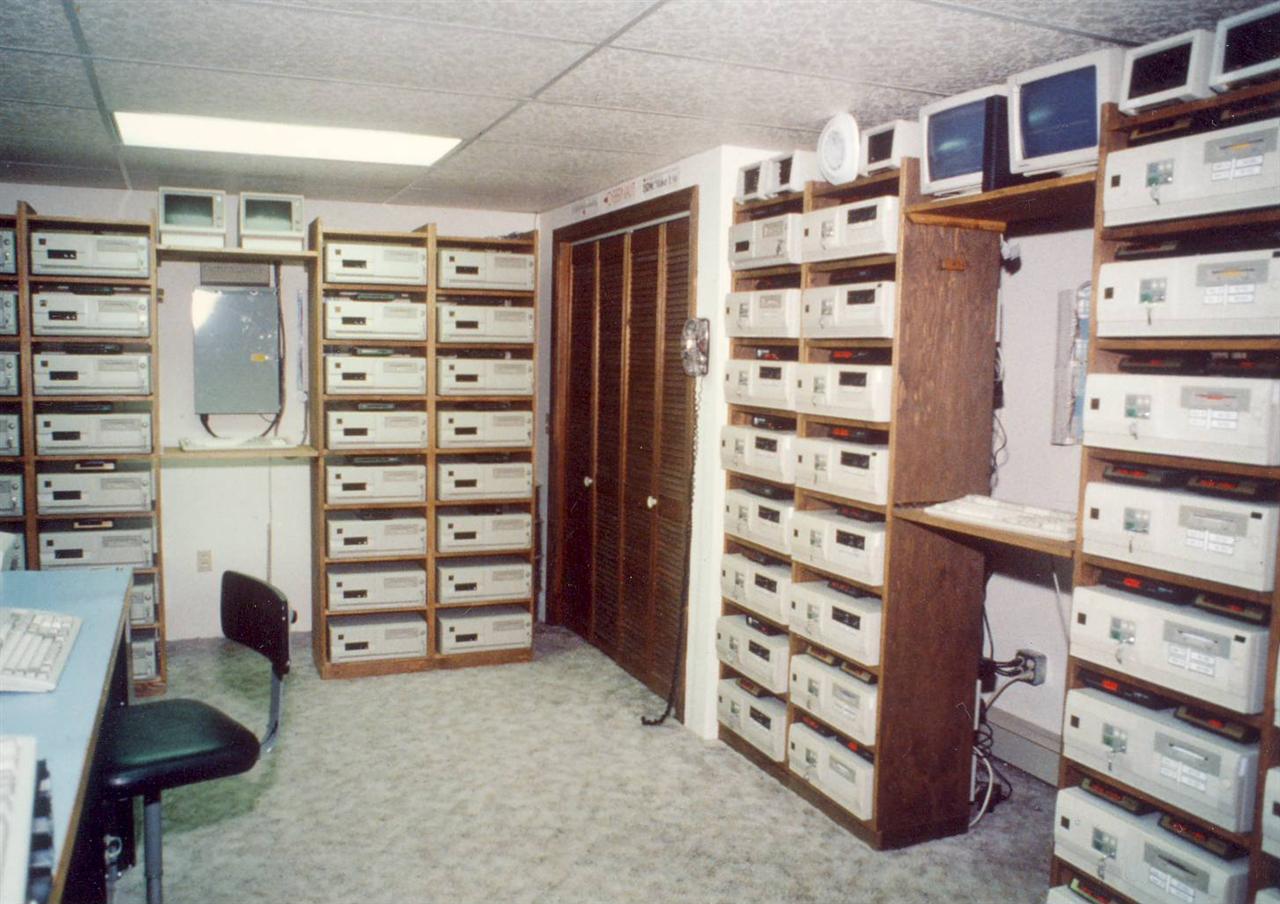 Software Creations was quite instrumental in our first website presence (beyond the original single pages).  It was an inititave they had at the time called the "Web BBS", which was their attempt to transplant the structure (and culture somewhat) of BBS's to the web.  In the end it didn't work, but we were part of that attempt.  We unfortunately have no screenshots showing what the content parts of the site looked like back then. We do have a screenshot of the "front door" (and the main menu) of that version.  There isn't much to see though because all of the "content" was behind the login.  The Web BBS version of our site went online in November of 1995. 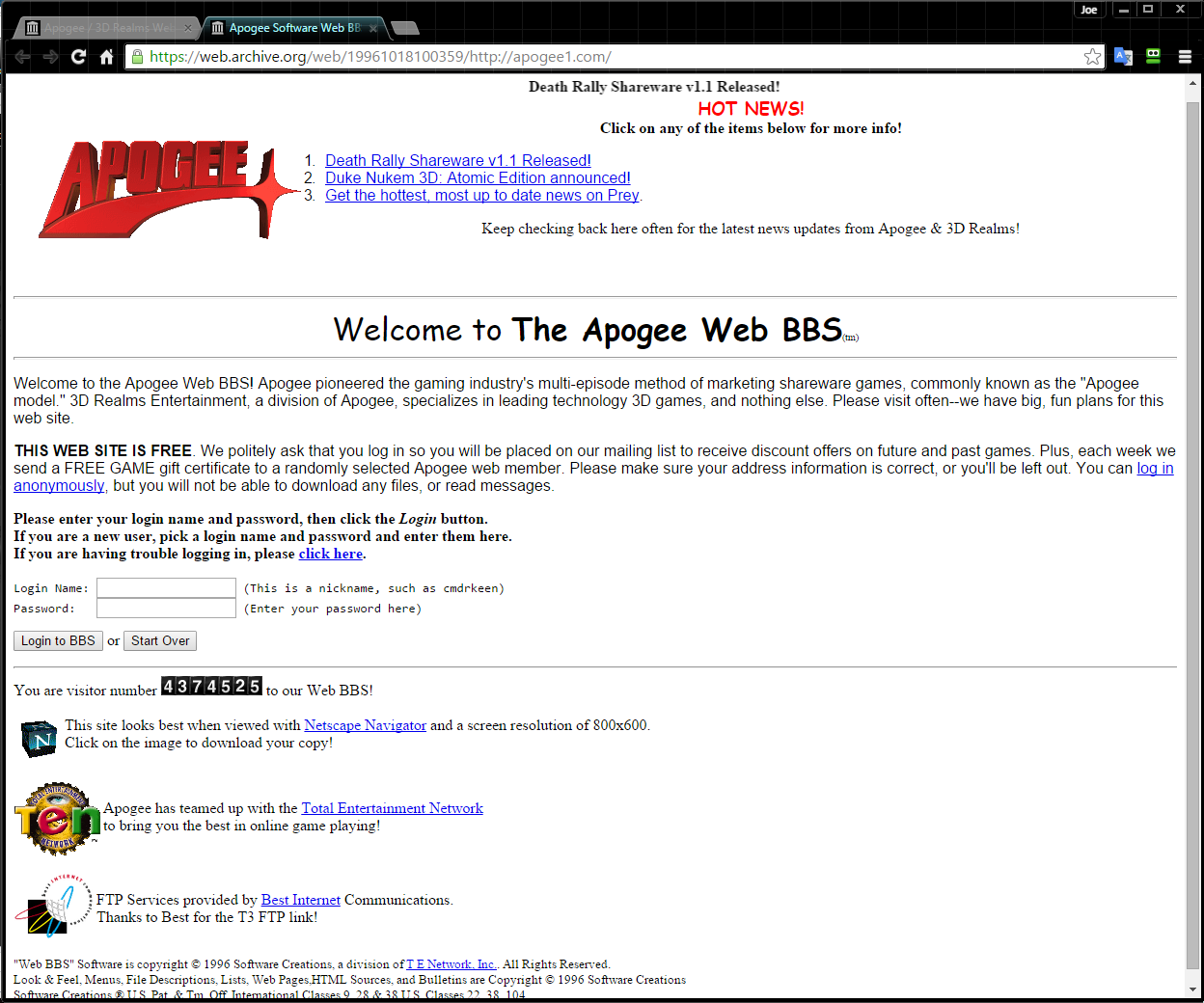 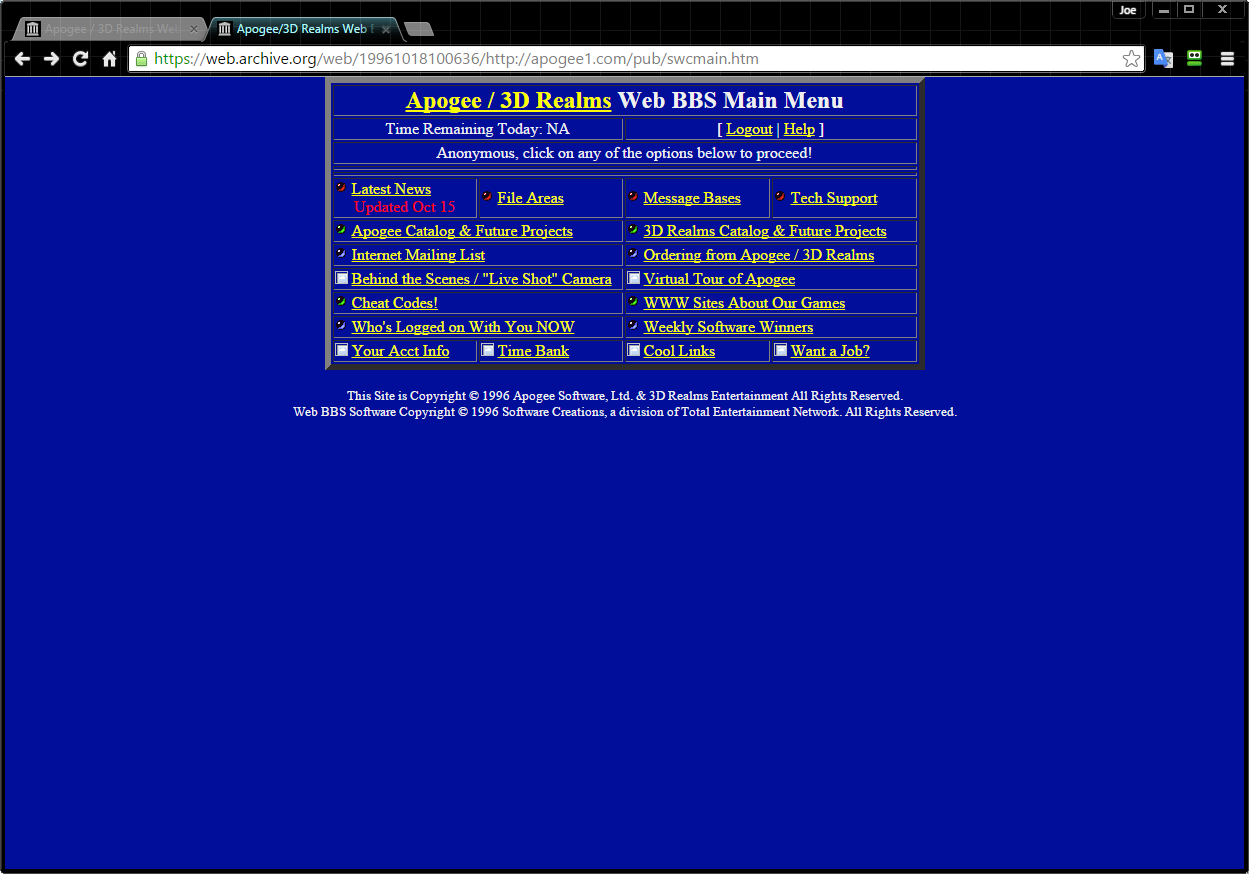 Shortly after the screenshot above, we stopped using the Web BBS software.  We moved onto our own website, which at this point would have been using www.3drealms.com.  Internet records show that we registered both apogee1.com and 3drealms.com back in September of 1994, but we wouldn't have used the 3D Realms name until much later due to the timing of the games under that product line.   We had two versions versions of the website that had no actual codename (like the other designs). These two were mostly banal in their design, but it was our first attempt at the overall layout that our site had over the years.  These ones had little to no design.  One was all black, and another had brown/wooden menu elements.  The latter we have no good screenshot of.  The picture we have below only exists because it was scanned out of a print manual that happened to have the picture in it (not in color unfortunately).

The Black one we unfortunately have a variant of that shows christmas lights as part of the design!  Not quite sure what Joe was thinking with that one. 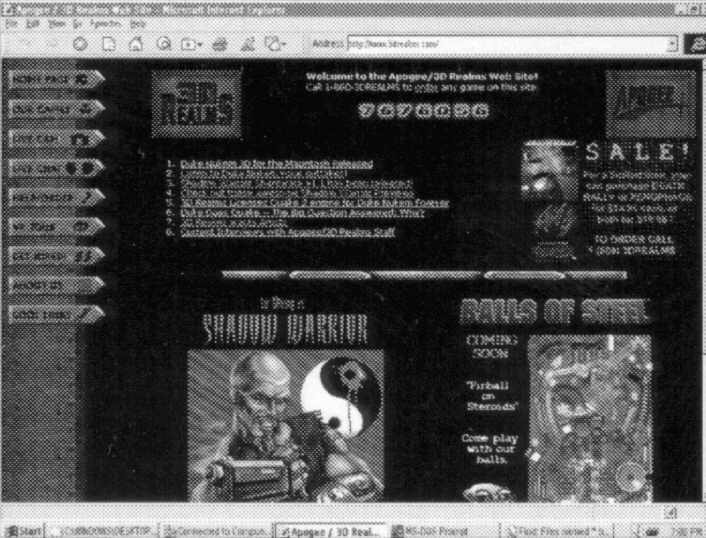 We never formally named the various versions of the website, but we had some internal development code names for them that got used in a few places.

"Green TV" was what we called this version of the site, which first went online July 18, 1997, and actually was in use for less than a year.  Here's a shot of what the front page looked like.  What you can't see in this are that a lot of the front page elements would animate, and it wasn't a static look to the site.  The horizontal string of numbers was constantly changing.  Memory says the numbes meant something, but can't remember that for sure all these years later.  Other images had an animated look to them in the site design, so this one was the most "alive" of any of the designs we ever had. 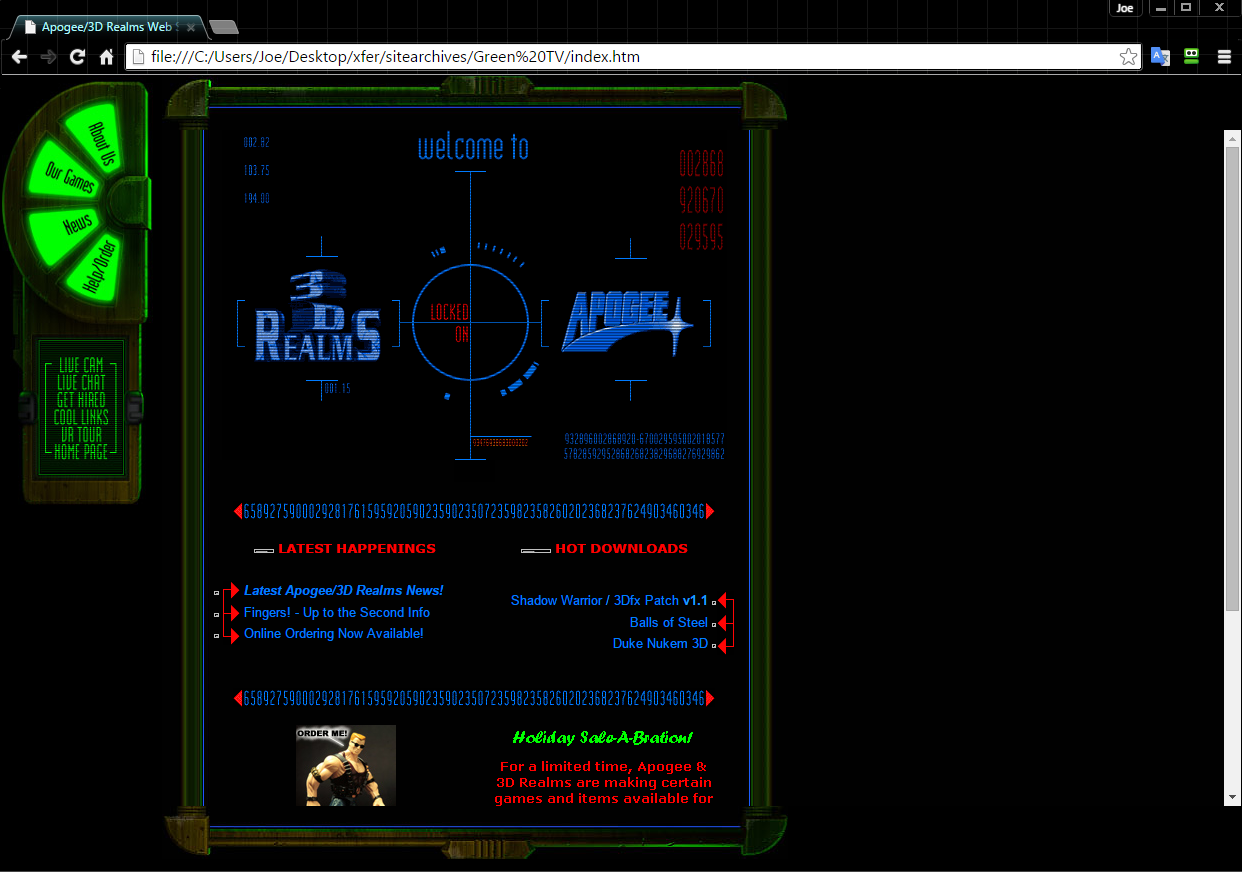 This version of the site we called "Apogee98".  Mostly because at that time the name Apogee stopped being one we used in 1996 (with Stargunner being the last game under that name), so Joe wanted to get the name out there somehow, and used it to describe this version of the site.  The 98 part comes from the fact that it launched on February 6, 1998.

This version was much brighter than the Green TV variant, as it used white as its base color, where the GreenTV one used black.  It was also less "animating", the design was static and didn't move like the GreenTV one did.

This version of the site was the first to include a way to order games online.  It wasn't anything like it is today with Steam and GOG and things of that nature.  It was a way to order physical product that would be shipped to you.  But was our first online store of any kind.

We also have a few variants of some of the logo graphics that were never used, so check them out.  :) 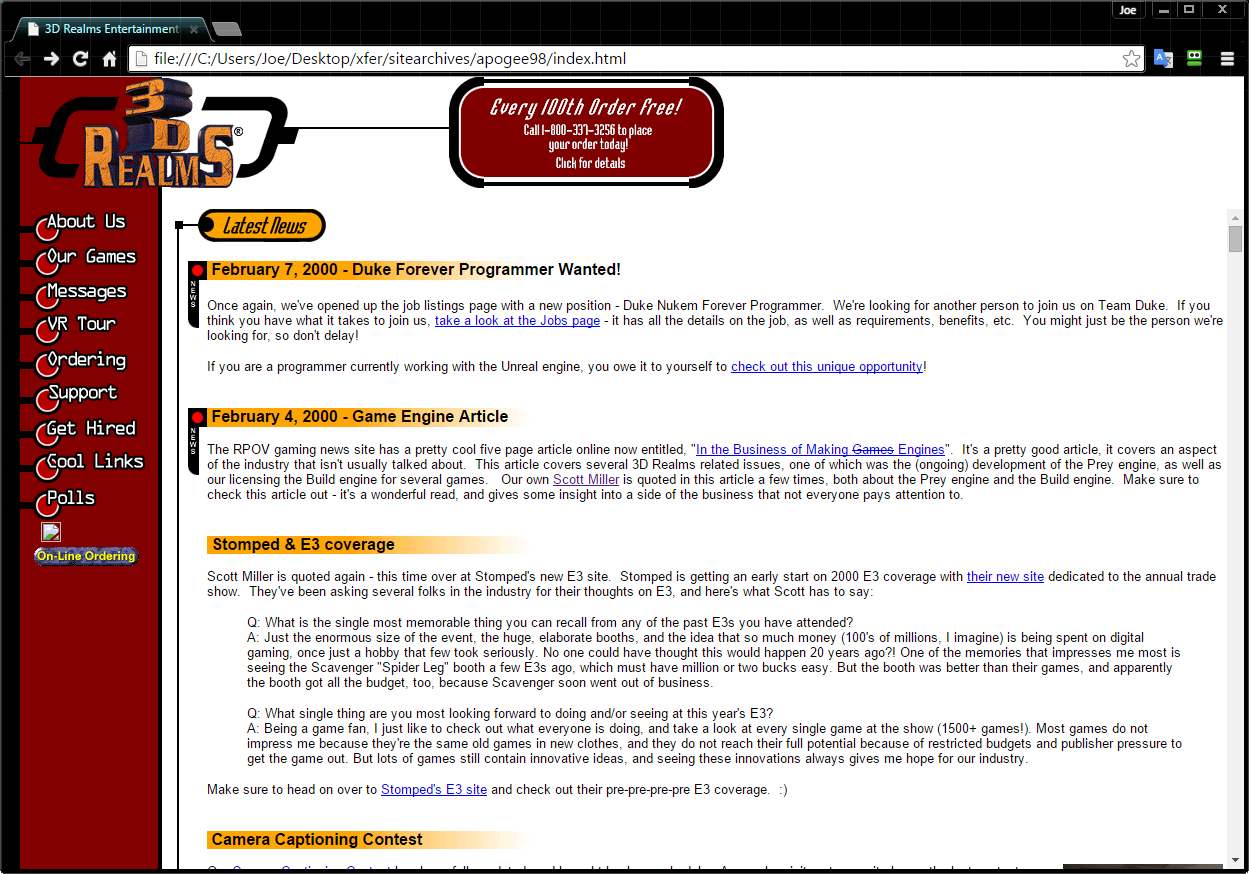 It wasn't always intended to be that way.  We had designs on replacing it many times over the years, but it was always tabled until we had finished Duke Forever, and you know what happened there.  So this design stayed online (probably way too long) until Interceptor bought 3D Realms, and relaunched the brand with the 3D Realms Anthology in 2014. With that came a new website.

The Y2K site became known as the "Legacy Site" when Interceptor took over, and the ENTIRE SITE is still available online.  If you've never checked it out, you can do so here: http://legacy.3drealms.com.  It all still works. 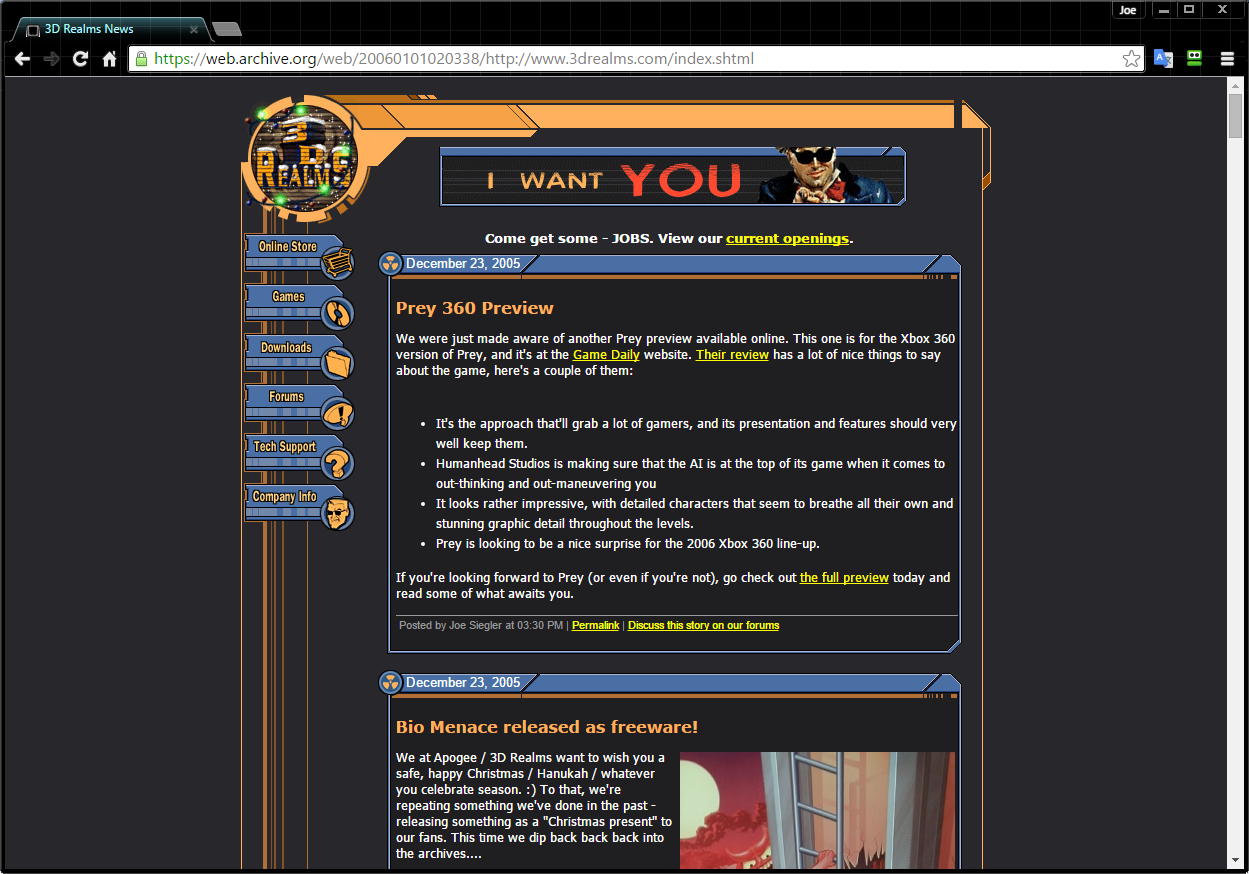 Something cool about the Y2K site was discovered during the research for this article.  Joe was plowing through his archives of the old versions of the site, and discovered some of the scratch/earliest versions of the Y2K site during site development.   We present some of them here for you to check out.  They cover several different stages of the development of this version of the site, and you can see some other color schemes, and display ideas that were ultimately rejected.  Click on any of them to see a larger version.

There's plenty more things, but we need to end somewhere.  We hope you have enjoyed this look back at our website history.  If you really want to get down and dirty, check out this timeline page on the legacy site.  It gets into precise release dates for just about everything that's ever happened with the company. Ever.  :)

Additionally, our legacy news archives contain every story from the launch of the site back in 1995 up until 2013, when we published the last story on the legacy site.  The actual first story was published three days after the launch of the site. We have a marker story from July 7, 1995, but it was published some time later.  That "marker story" contains this text, which was written in 2005..  "I find it hard to believe that our website has been going for a decade now."  Well, it has been going for TWO DECADES now, I find that even harder to believe!  Yet, still we're going forward.  Bring on Bombshell!

If you'd like to leave a comment on this, please click on the "Discuss" link where you can talk about this story on our forums!   If there's a favorite part of the site from the past we forgot to mention that you liked, please.  Let us know about it!

EXTRA BONUS:  We were able to recover one of the earlier versions of the Virtual Tour from the "Black" website, which would have been somewhere around early 1997.   This is ONLINE and you can actually view it now.  Some of the links in the tour that branched off to other parts of the (then) website won't work right now.  But the tour itself is working (including the Zork easter egg), so if you want to check out some mid 90's website design sense, check out the 3D Realms Virtual Tour - 1997 edition.  :)

Just don't get eaten by a grue.