Read how famous author Orson Scott Card was a fan of one of our earliest game titles, Kingdom of Kroz!

One of the more famous science fiction writers is Orson Scott Card.  He's most known for his Ender's Game series of books (which was recently made into a big budget movie).  If you want to throw back the clock, you'll find out that Orson was a fan of our company's first game, the Kroz series.  Scott Miller speaks a bit about this connection:

Twenty-five years ago, famed science fiction writer, Orson Scott Card, most famous for his brilliant Ender's Game series, contacted me because he had become hooked on one of my early games, Kroz.  At the time, I had read Ender's Game and considered it one of my all-time favorite fictional stories.  So it was quite a thrill to be interviewed by this author.  An interesting note to this interview is that Card mentioned that his son, Geoffrey, was a fan of my game and had taken to playing it a lot.  So, about 18 years later I learned that Geoffrey had become a game development professional, and over the years he and I have become online friends in several forums, including Facebook.  So I couldn't resist asking him very recently if he had any memories of Kroz.  Here's what he wrote:  "I saw that [my father] was playing this weird game with ASCII characters, and I asked him to explain what was going on. He pointed out the walls and monsters and other interactive elements ... but the thing that made me want to play was when he fell down a bottomless pit and died. The quick perspective change and the humor made me want to play the game myself, and I got really into it for a while. It might have been that enthusiasm that led my dad to think this tiny, one-man game was worth an entire column."

You can go to this link below to read a little more about Kroz, and also play a web-based version of the game that was recently made by a fan: http://www.textmodegames.com/download/kingdom-of-kroz.html

Finally, you can read the entire article by Orson Scott Card by clicking on the image below: 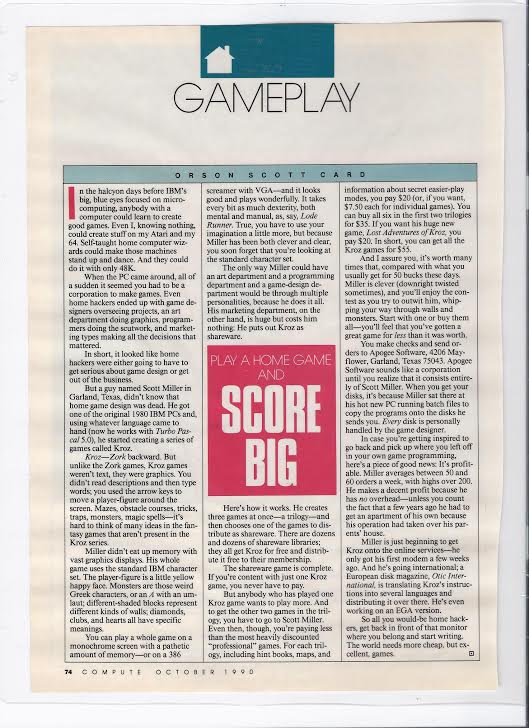