Today (Nov 19) is the 20th Anniv of Stargunner, the last title released under the legacy era Apogee brand. Today our company historian Joe Siegler takes a quick look back at this title. 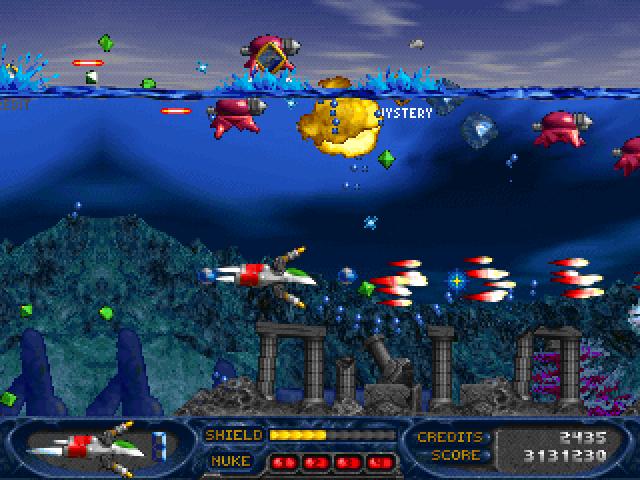 The Apogee name has meant a lot in the history of PC gaming.  From the invention of the Shareware concept to PC gaming to some legendary titles such as Commander Keen, Duke Nukem, and many others, it has been a long standing name in the game industry.   However, in 1996, the Apogee name was retired as a brand when we moved pretty exclusively to 3D games, hence the 3D Realms branding.  But before we got there, there was a pretty darned cool game released as the final title.  That being Stargunner.

Stargunner was the third shooter game we released in the 90’s.  The first being Major Stryker in 1993, and the second being Raptor: Call of the Shadows in 1994.   The third and final one was Stargunner, which was released November 19, 1996.

Stargunner was spearheaded by David Pevreal, who had this to say about the game back in 2005.

Stargunner represented the first completed attempt at a game for all of the developers involved. While the commercial success of the game was mild, it certainly launched the careers of the 3 programmers who all moved on to find success in the games industry. Stargunner's artist also found success in his chosen field, though outside of games.  The game itself was written in C++, but with heavy usage of assembly for the video and sound routines. It was one of only a few games that could run at 60 frames per second on the current "486" hardware of the day. Most of the art was developed on the Amiga using Deluxe Paint. In fact, the game was originally supposed to be an Amiga game with a PC version supposed to follow, but the PC version soon overtook and led development, and sadly the Amiga version was eventually dropped.

Our own Scott Miller, founder of Apogee also had this to say about the game..

Stargunner, released late in 1996, was Apogee's final game. Apogee had officially started in 1987 with the release of a shareware game, Kingdom of Kroz, solely developed by Apogee founder, Scott Miller. The Apogee label rang loudly for nearly ten years in the shareware arena, with games like Commander Keen, Duke Nukem, Raptor, Wolfenstein 3-D (the father of the FPS genre), and Rise of the Triad. Apogee pioneered the shareware method of selling games, and it was this method that allowed Apogee (as well as Id and Epic) to rise from nothing to become a successful, entirely independent game studios.  But as the industry matured, it became apparent in to us 1994 that 3D was the future, and so a new company name was created, 3D Realms, and this is the name that soon replaced all signs of Apogee.  Stargunner was Apogee's final song. It was a great little game, but great little games didn't cut it by then, because in 1996 we lived in a would dominated by three-D's: Doom, Duke, Descent -- the 3D revolution had begun.

As these guys mentioned, the game wasn’t the biggest seller, but was very beloved by its fans.  A couple of years after it was released, we discontinued the game.  At the time, it was due to the fact that many older DOS games had issues running natively in newer versions of Windows, so we discontinued them when we couldn’t guarantee they ran perfectly.  Of course now this is a non issue with the advent of DOSBox, but back then we discontinued them for that reason.   The game lived on though because on June 22, 2005, we released the game as freeware on our website, so anyone who could get past the technical limitations at the time could still enjoy the full game.

A Bit of Music

At the time of Stargunner’s original release, Apogee/3DR’s in house musician (Lee Jackson) was well entrenched at this point, having worked and done the music on numerous projects in the past (some of which were Duke Nukem 3D, as well as Rise of the Triad & Shadow Warrior). This of course brings us to Stargunner, a game that had all if it’s music done by Lee Jackson. Back in this time, Lee and several other folks making game music were either influenced by, or had their feet firmly planted in the mod scene from back then. Another company of which I have known for ages, Remedy Software (Max Payne, Alan Wake, Death Rally) got their start out of software and projects done for the mod scene in the early 90’s. To that, all of the music in Stargunner was done in this format.

Anyway, as part of the 2005 freeware release, we also released the soundtrack to the game. Stargunner was one of those games where the soundtrack was on the CD, and you could listen to it through the game that way. Given the way game music was back then, this made for a vastly improved listening experience when playing the game.  This game was also interesting, as the “Apogee Fanfare“, which had been in a boatload of games to that point, was given a rather large sonic upgrade. And it was never used again, as this was the last “Apogee” game.

A little past history of Stargunner. Back when the game was first pitched to Apogee, the first two betas were submitted from the developer, and they had well, one of the most uh, “interesting” theme songs I’d ever heard. The developer submitted it with a song with lyrics. That in and of itself wasn’t so bad, but the actual singing in the soundtrack. It was well.. NOT GOOD. They also had seriously obfuscated the location of the singing in the game’s data file – I tried some years later to release just that, but the original developer couldn’t find their file, and while I still had a beta from way back then, I still couldn’t extract it out. Anyway, they made a change in the second beta where the signing was different, but it was still pretty bad. The singing disappeared after that.

This brings us to today.  Back around this time, most of the office seemed to be really into “Beavis & Butthead”, and we all watched it rather a lot. So did Lee Jackson. So if you take Lee’s sense of humour, Beavis & Butthead, the singing Stargunner theme, and his fascination with mod music… Well, you get something like this.  It’s called “SGHolio”. It’s a song Lee put together that has bits from Beavis & Butthead, the original singing version of the Stargunner theme, and his own music. Now, I asked Lee before I did this, and he said I could release it only if I included this quote of his.. “Lee still thinks it isn’t one of his best parodies, but he agreed to let me publish his part of it for history’s sake.”

So go check out this song, and have a look into some of the wacky stuff that went on in the background behind the scenes at Apogee back in the mid 90’s. :)   You can also download an mp3 of it here.

The one thing that always bugged me over the years was my inability to access those original Stargunner betas with their singing.  I tried a few times over the years to get into the files to get the mod files, but failed.  I’m not a programmer, so my skill set there is limited.  So fast forward to June of 2015, and I was talking with Evan Ramos, one of the EDuke32 programmers about this.  I sent him the betas that we have, and he was successful at getting into the files, and broke the betas down into all their component pieces.   Here’s what Evan said about how he got into the encrypted game files..

Stargunner stores all its game data, including art, sounds, and music in a container file named STARGUN.DLT, similar to an IWAD in a Doom engine game, but with a specific encryption that only the game itself knew how to unpack. Fortunately, I didn’t need to reverse engineer any of it myself, but I did piece together a complete DLT extracting tool from the work of a few different people who figured out how to list all the files inside the DLT and decrypt them. The full technical explanation could be a post of its own, but I’ll end with credit where credit is due: “Wormbo” on the XeNTaX forums, Ville Vuorinen (“xtaateli”), Igor Gutnik (“The_coder”), and Adam Nielsen (“Malvineous”).

I contacted Dave Pevreal about all this, and asked for permission to include those two mod files in my article here.  David was cool about it and let me make them available.  So I present to you the original theme songs from Stargunner Betas 1 & 2.  They’re dated June 9, 1994 and Oct 19, 1994 respectively.  :) 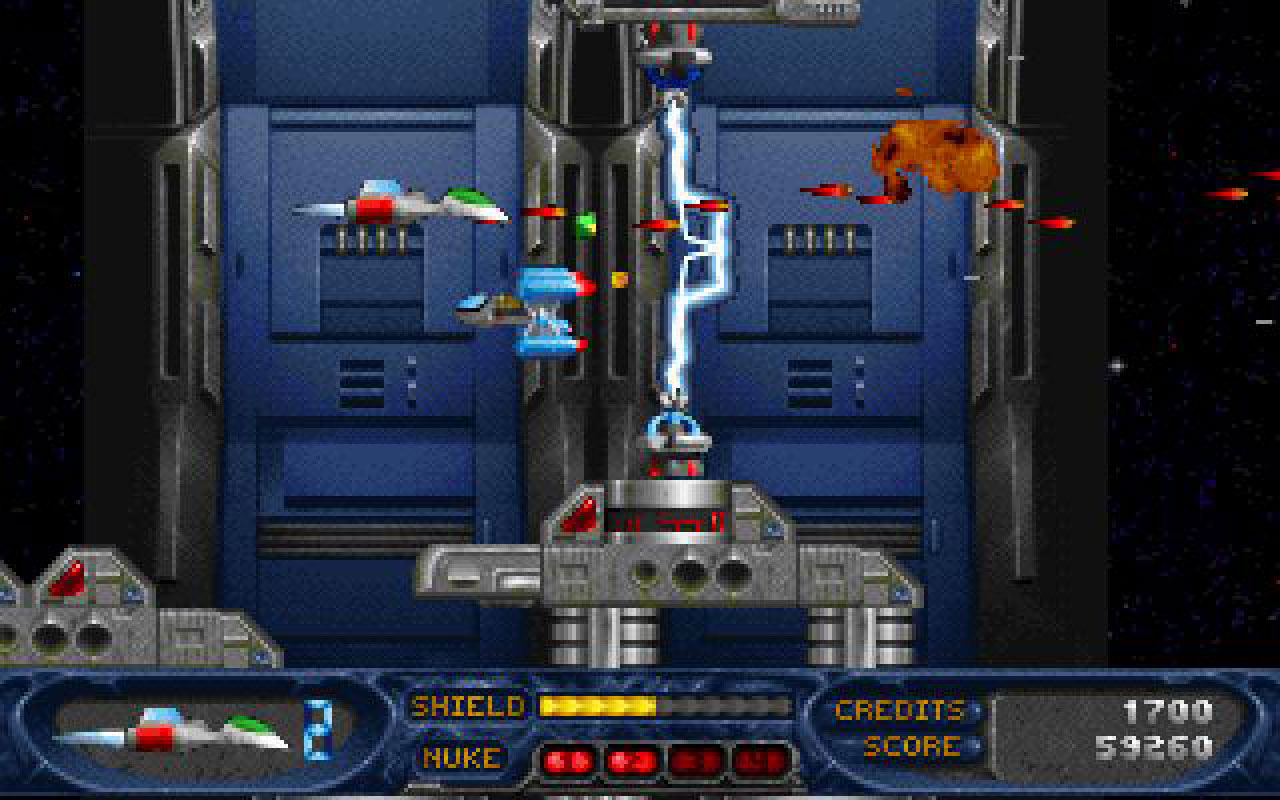 Please note that these are the original .mod files - these are *NOT* MP3 files, you will need something that can play these older file formats (such as VLC).

Stargunner was a great moment in my personal past working with Apogee/3DR.  I loved working on it, and I loved playing it.  Through the freeware release a decade ago up until today, it retains its fun nature, and through the magic of DOSBox, you can still play it right now.  The 3D Realms website makes it available for download for free.  If you don’t have an account on the 3D Realms site, sign up, and as part of that you can get Stargunner yourself for free now.

One last little bit of trivia if you didn’t know.  When you play the game and go into the store to upgrade your ship, a song plays, and at the beginning of the song are the words “Spend More Money!”.  The person behind that voice is none other than the 42nd President of the United States, Bill Clinton.  Lee thought it would be funny to show that clip in the song.  :)

Happy Birthday Stargunner!   “it is allllllll up to youuuuuuuu.”   :) 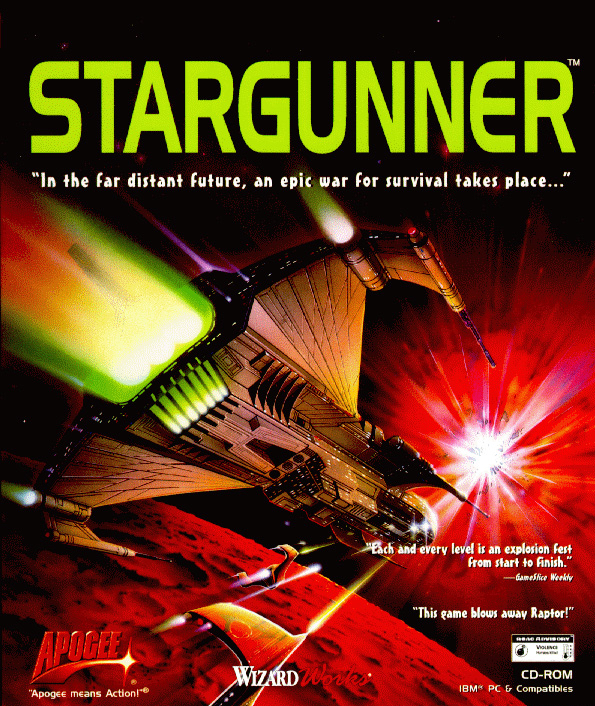